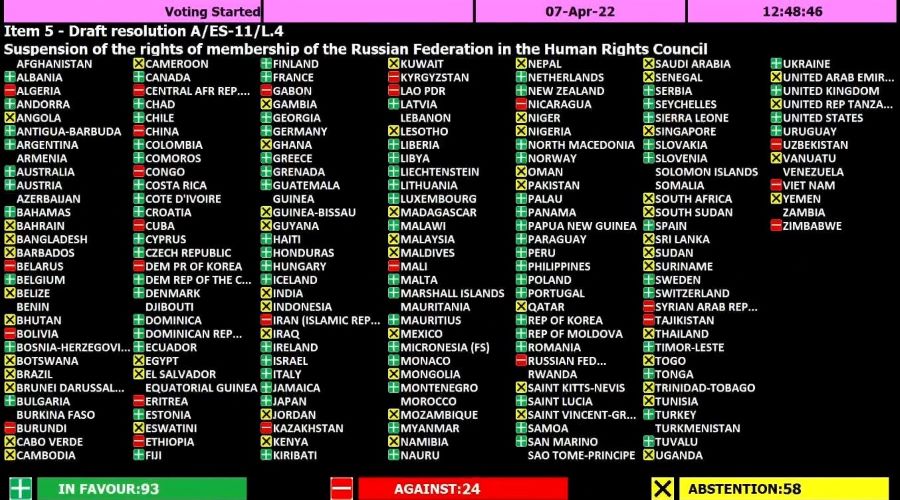 The United Nations General Assembly has voted to suspend Russia’s membership of the UN Human Rights Council, by a two-thirds majority.

Yesterday, the United Nations General Assembly passed a resolution suspending Russia’s membership of the UN Human Rights Council on the grounds of “gross and systematic violations and abuses of human rights” in Ukraine. 93 States voted in favor of the resolution, 24 States voted against, whilst 58 States abstained.

A two-thirds majority of voting members in the 193-member General Assembly, based in New York, is needed to pass a resolution. Abstentions do not count.

Prior to the vote, Russia had been in its second year of a three-year term at the Council.

Ukraine’s Ambassador to the UN, Sergiy Kyslytsya, said, “Russia’s actions are beyond the pale. Russia is not only committing human rights violations, it is shaking the underpinnings of international peace and security.”

Votes in favor of suspending membership of the Human Rights Council are rare; with this one only being the second time it has happened. The first was in 2011, when Libya’s membership was suspended because of violence against protesters by forces loyal to then-leader Muammar Gaddafi.

The UN General Assembly resolution (60/251), that created the Council in 2006 allows for any state which breaches the UN Charter or does not cooperate with UN mechanisms to have its membership suspended.

Civil society actors and allies have been pushing for the UN to suspend Russia from the Human Rights Council since the start of the  invasion. Last month, Humanists International joined a number of NGOs in making a statement at the UN calling for the immediate suspension of Russia as a member of the UN Human Rights Council.

Yesterday’s resolution was the third UN General Assembly resolution condemning the Russian invasion of Ukraine: the first called for Russia’s immediate and unconditional withdrawal of troops; whilst the second recognized the scale of the humanitarian crisis in Ukraine.

Russia’s suspension from the Council comes against a backdrop of reports that Russian forces have committed multiple war crimes since its illegal invasion of Ukraine, including indiscriminate bombings, rape, torture, and summary executions.