The members of the Board are nominated and elected by our Members and Associates. 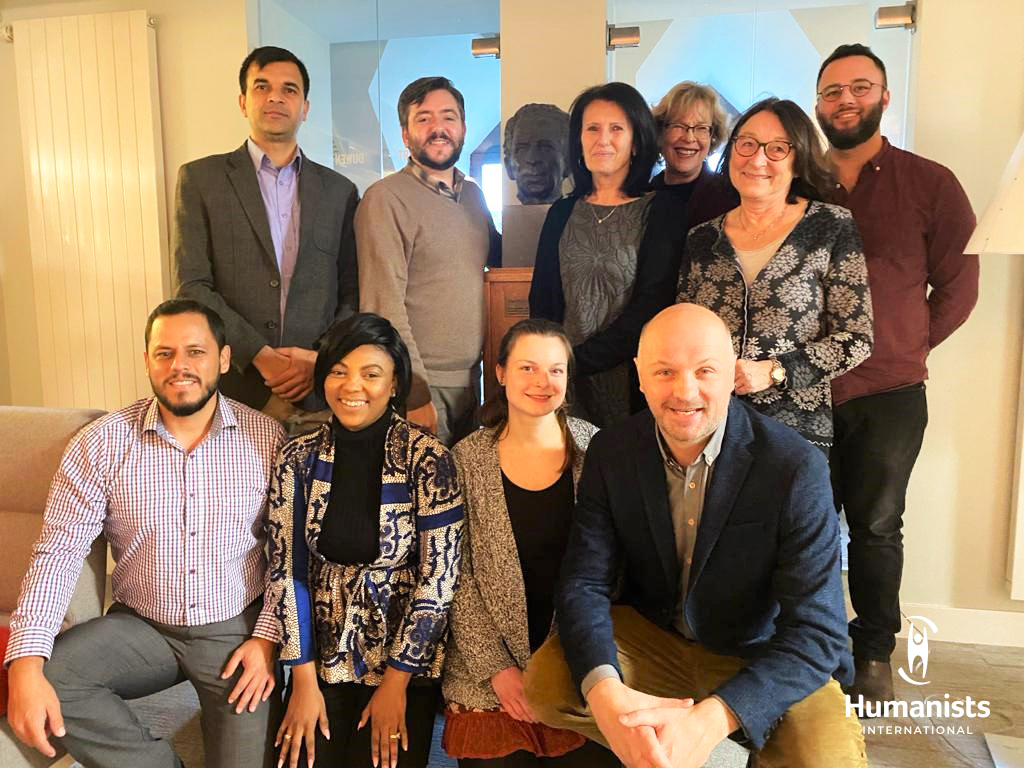 Andrew joined the Humanists International Board in 2010 and has been serving as President since 2015. He has been Chief Executive of Humanists UK since January 2010, following five years coordinating the Humanists UK’s work in education and public affairs. Andrew writes, talks and campaigns on Humanism and humanist topics extensively. He is a former director of the European Humanist Federation (EHF) and former head of the Humanists International delegation to the Council of Europe in Strasbourg. Andrew studied Classics and Ancient and Modern History at the University of Oxford.

Elizabeth started as Director of Advocacy in January 2016, after two years heading Humanists International’s delegation to the UN in Geneva. She focuses her work on the rights to freedom of thought, belief, and expression, non-discrimination and LGBTI rights, sexual and reproductive rights, the rights of the child and the rights of women, particularly in relation to religious, traditional and cultural laws and practices.

Elizabeth manages Humanists International’s advocacy work at a number of institutions, including at the UN in Geneva, New York and Paris, the Council of Europe, European Union, the African Commission on Human and Peoples’ Rights, the Organisation of American States, and the Organisation for Security and Cooperation in Europe (OSCE). She also does human rights training sessions for politicians, diplomats and officials.

Elizabeth is: a member of the OSCE Panel of Experts on Freedom of Religion or Belief; a Member of the Global Steering Committee of the UN Fez Process; and a member of the Advisory Board for the EU’s Global Exchange on Religion in Society. She is also Vice Chair of the UN NGO Committee on Freedom of Religion or Belief (in Geneva), an International Patron for the Pink Triangle Trust and an International Advisor at the Raif Badawi Foundation.

In April 2016 Giovanni obtained a PhD in Philosophy from Rome “Tor Vergata” University with a thesis entitled “If you want to be a philosopher, write novels. The philosophy of Albert Camus”. He has published more than thirty academic papers in English, French, and Italian mainly on the philosophy of Camus and Nietzsche. He has published also many articles on secularism, liberalism, and pluralism in different international revues and blogs.

Before joining the Humanists International, Giovanni worked as a volunteer for the Italian Union of Rationalist Atheists and Agnostics (UAAR). In 2013 he won the UAAR best thesis prize with his work on “Nihilism and Responsibility at the age of God’s death in Nietzsche and Camus”. In 2017 he published his first book on “Atheism and Philosophy without Gibberish” for the Italian publisher “Nessun Dogma”. In 2020 he published his second book: “Against nihilism. The atheist and humanist wager of Sisyphus” for the Italian published “Diogene Multimedia”.

His work focuses on researching, providing information and evaluating strategies relating to cases originating in the MENA region together with the Humanist at Risk coordinator and the rest of the team.

Kacem is also an essayist and a passionate advocate of secularism and humanism. His essays have been published, among others, in Le Monde, Frankfurter Allgemeine Zeitung, Neue Zürcher Zeitung and The Huffington Post, and he is the co-editor of the secular Arabic/French magazine La Vague Culturelle. In 2018, he was among 30 other personalities named as Swiss of the Year by the Swiss Sunday newspaper SonntagsZeitung.

Lillie joined Humanists International as Advocacy Officer in April 2020. She supports our human rights advocacy work at the UN Human Rights Council, the Council of Europe (CoE) and the OSCE, with a focus on representing our views at the CoE and OSCE, and supporting our members in engaging with the UN.

Lillie has a masters degree in international law and prior to joining Humanists International she was practising as a solicitor advising in international judicial proceedings. She also has experience volunteering in a legal capacity at the Centre for Women’s Justice (a UK-based charity supporting victims of domestic violence) and the Howard League for Penal Reform (a charity advocating for the rights of people in prison).

Mahalet is a Research & Campaigns Consultant at Humanists International, where she will get an insight and assist the organization in its efforts to campaign on humanist issues. She joined the team in February 2020 as an intern.

Tommaso Virgili is a Postdoctoral Research Fellow at the WZB-Berlin Social Science Centre, where he works on the project “Modernization Movements and Reform Theology within Islam in Response to the Challenge of Fundamentalism, with a Focus on Islam in Europe and the Countries of the Islamic World”. He received his Ph.D. in Comparative Public Law from Sant’Anna School of Advanced Studies in Pisa (Italy), with a thesis focused on the constitutional rights of homosexuals and freethinkers in Egypt and Tunisia. He is also a Research Associate at the Wilfried Martens Centre for European Studies and a Visiting Fellow at the European Foundation for Democracy – policy centres based in Brussels.