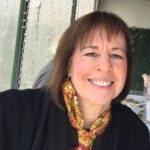 Andrea Gilbert, a humanist human rights defender who specialises in LGBTI+ rights and countering anti-Semitism, is currently appealing a one-year sentence, suspended for three years, for allegedly filing a false accusation. The conviction relates to a complaint filed by Gilbert, together with Panayote Dimitras, on behalf of the Greek Helsinki Monitor, which alleged that a high-ranking Bishop had abused his ecclesiastical office and incited hatred in a statement they deemed to be filled with anti-Semitic rhetoric published on the website of the Diocese of Piraeus. She remains free while awaiting the outcome of their appeal.

February
On 15 February, Andrea Gilbert together with her Greek Helsinki Monitor colleague, Panayote Dimitras, was convicted of filing a false complaint against Metropolitan Bishop of Piraeus Seraphim by the Three-Judge Misdemeanors Court of Athens. They were sentenced to one year in prison, suspended for three years. Dimitras and Gilbert have filed an appeal.

April
On 29 April 2017, Gilbert and Dimitras filed a complaint filed with the Department for Combating Racist Violence (Attica Division) on behalf of the Greek Helsinki Monitor against a Bishop, alleging that he had abused his ecclesiastical office (contrary to Article 196 of the Penal Code) and incited violence or hatred (contrary to Article 1 Law 927/1979) in a statement published on the website of the Diocese of Piraeus the day previously. In their complaint, the Greek Helsinki Monitor argued that the Bishop had referenced well-known anti-Semitic conspiracy theories around “global Jewish domination.” The statement was also condemned by the Central Board of Jewish Communities in Greece as an “anti-Semitic delirium.”

Andrea Helen Gilbert was born in Brooklyn, New York and is a permanent legal resident of Greece since February 1989. Upon arrival she joined the Greek Section of Amnesty International. 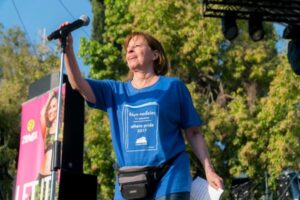 In addition to her Human Rights activism, Andrea is a freelance art critic and exhibitions curator. She also works as a Greek to English translator and editor.

Humanists International calls on the Greek government to quash the conviction against Gilbert and Dimitras immediately and unconditionally.

Humanists International has been monitoring the case of  Gilbert and Dimitras, and has published statements in their support.