Gulalai Ismail is a multiple award-winning human rights defender. She founded Aware Girls in 2002, an organization which works to empower and educate women and girls on rights and leadership in Pakistan. Malala Yousafzai participated in the programme in 2011, the year before her attempted assassination at the hands of a Taliban gunman for her activism. Gulalai was elected to the Board of Humanists International in 2017 and is a previous winner of the International Humanist Award.

From her initial detention in October 2018, Gulalai would spend almost an entire year on-the-run. Until she was eventually able to claim asylum in the United States in September 2019.

On 12 October 2018, Gulalai Ismail was detained by the Pakistani Federal Investigation Authority (FIA) as she returned home from attending a Board meeting in London, UK of Humanists International (known as ‘International Humanist and Ethical Union’ until 2019).

Gulalai had her passport confiscated and was placed on an ‘exit control list’ (effectively a ban on leaving the country).

Shortly before she was detailed by the FIA, Gulalai sent an audio message to Humanists International staff to alert them to her detention. Within minutes of receiving the message an emergency meeting was convened in London to coordinate the subsequent campaign for her release. 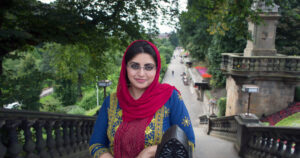 In early 2019, Humanists International received reports that Gulalai’s detention was as part of a mass arrest of at least 82 activists, partly to do with the Pashtun Tahafuz Movement (PTM). In February 2019, the President of Humanists International, Andrew Copson, issued an open letter calling for the safe release of Gualai and all the other peaceful PTM protestors.

In May 2019 reports emerged that a FIR (First Information Report) was raised against Gulalai in relation to a speech she gave at a rally. The accusation in the FIR was that this speech was “anti-state” or “seditious”. It is very common for some activists to be branded as “anti-state” or “seditious” in particular when they are critical of military or government actions constituting human rights violations.

Throughout 2019, Humanists International worked quietly and diligently behind the scenes to brief contacts from various State authorities, as well as the United Nationals and other regional bodies.

In July 2019, Humanists International’s Director of Advocacy, Dr. Elizabeth O’Casey, made an intervention at the UN Human Rights Council in Geneva. In the intervention, Dr. O’Casey said: “We call on Pakistan, a member of this Council, to revoke the charges against Gulalai with urgency, to instead protect and cherish a citizen who speaks truth to power in defence of countless women and girls and who provides hope and courage in a world full of intimidation and injustice.”

Later in July 2019, a coalition of over 40 international civil society organizations, including Humanists International, wrote an open letter to the United States Congress.

Also in July 2019, the New York Times published an article about Gulalai’s life in hiding. It describes her “leading a phantom-like existence, shifting from house to house, timing her movements carefully, stepping out only with a scarf over her face and relying on an underground network of fellow feminists across Pakistan’s cities who are risking everything to hide her”.

“I need you to know how immensely grateful I am to all of you, and to the wider humanist family around the world; by continuing to raise my case and making sure that authorities in Pakistan could not forget about me.

“The work of Humanists International was key in making sure that the authorities in Pakistan were held to account. I am incredibly grateful to all of you who helped.”

Humanists International remains concerned about the treatment of peaceful protestors and activists in Pakistan. According to the organization’s Freedom of Thought Report, there are grave violations of the right to freedom of expression, which leads to a clamp-down against the advocacy of humanist values.

From within minutes of Gulalai’s initial detention, until her safe arrival in the United States, Humansits International worked closely with other organizations to liaise, coordinate and exercise a multi-pronged campaign to support Gulalai.

This involved the close collaboration of our Members and Associates around the world.

We also raised awareness of Gulalai’s case at the UN Human Rights Council in July 2020.

Eventually, in October 2020, Gulalai was announced as Humanists International’s first-ever Ambassador – a high level public representative of the humanist movement.