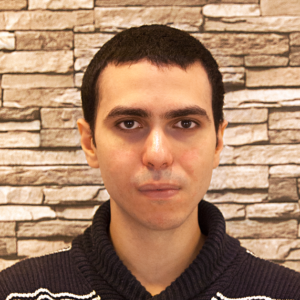 Mohamed Hisham is an atheist and LGBTI+ activist from Egypt. In February 2018 he was kicked off a TV show because he said that he didn’t believe in God. After that appearance, he was forced to go in hiding and to find shelter in Germany, where he currently reside in asylum.

On 14 October, Mohamed publicly comes out as a queer person with a post on his Facebook profile where he kisses Amed Sherwan, an Iraqi atheist refugee in Germany.

On 11 February, Mohamed was invited to a TV show called “Egyptian Street” to discuss his atheism with an Imam. No real “discussion” took place at all. Mohamed had barely the time to say that he didn’t believe in God when the host interrupted him and started to rail against him, inviting him to see a psychiatrist and kicking him off the show.

One week later, after a second appearance in TV, the Egyptian police visited and interrogated Mohamed, but could not find any evidence to charge him with blasphemy. The family of Mohamed backlashes against him and brings Mohamed to a sheikh to reconvert him to Islam.

The video of Mohamed’s appearance goes viral all over the world. Mohamed receive death threats online. He declares that he repented and that he went back to Islam as a strict Muslim. After that, he disappears from social media and goes in hiding to protect himself.

While in hiding, Humanists International and other NGOs put Mohamed in touch with trusted contacts in Egypt to help him.

Mohamed leaves Egypt. He travels to South America, then Asia and finally, on his way back home to Egypt, he stops in Germany for a transit and seeks asylum at the airport of Frankfurt. He spends one week inside the refugee camp in Frankfurt airport, where he makes the mistake to open up with other refugees about his atheism. For this, he suffers the hostility and the harassment of other Muslim refugees in the camp coming from the Middle East.

Mohamed starts his process to get asylum in Germany. At this stage, Mohamed is still living in a closet as queer person.

Since 2017, under the pretext of the fight against terrorism, the country has been living under a state of emergency that has given security forces unchecked power to repress dissent. Political opponents, human rights activists, freethinkers and LGBTI+ people are particularly vulnerable categories, while the government exerts a tight grip on the media and civil society organizations.

Despite being formally a secular state, religious minorities and atheists still face discrimination in several domains. Article 3 of the Constitution only officially recognizes Christians and Jews as religious communities that have the faculty to refer to their own religious courts instead of Islamic law. No reference is made to atheists and religious minorities such as Bahā’īs and Jehovah’s Witnesses.

Atheists and agnostics are “one of Egypt’s least-protected minorities”, according to Human Rights Watch, and there has been a prolonged campaign to turn “youth” away from atheism, with several prominent atheists arrested and convicted.

One of the most visible signs of discrimination against atheists, apostates from Islam and members of minority religions is the policy concerning the Egyptian State ID cards, which include a section on religion where only one of the three “divine religions” can be recognized. Many elderly members of Baha’i or other minority communities further lack birth and marriage certificates. In 2008 the situation slightly improved, when two Bahā’īs were given permission to use a dash (“-”) in the religion section. However, Baha’is still do not enjoy the right to have their religion recognized, nor to profess it in public.

Muslim-born individuals who leave Islam are not allowed to change the religion field on their identity card. Only in a few cases in which Christians converted to Islam and subsequently returned to Christianity have the Egyptian courts, albeit inconsistently, allowed the change in the documents.

The Egyptian Penal Code explicitly outlaws blasphemy. Nestled among prohibitions on advocating “extremist thoughts”, “instigating sedition” or “prejudicing national security”, Article 98 (f) outlaws “disdaining and contempting any of the heavenly religions or the sects belonging thereto” with jail terms from six months to five years and/or fines of up to 1,000 Egyptian Pounds (approximately US$ 64). In addition, the desecration of religious symbols is punishable by up to five years in prison and/or fines of up to 500 EGP ($ 32), as per Article 160. The same penalties  apply to printing  distorted versions of religious books and mocking religious ceremonies (Art. 161).

All these provisions are also used against public declarations of atheism, and have been used to limit the freedom of speech of religious and non-religious groups and individuals alike.

Furthermore, Law 175/2018, the “Anti-Cyber and Information Technology Crimes law” has been arbitrarily used by the authorities to stifle online media and bloggers that allegedly spread fake news, threaten national security or attack the family values of Egyptian society.

Blasphemy cases have been increasing since 2011. Besides atheists and freethinkers, religious minorities such as Christians, Shi’a Muslims and Bahais are the most targeted with accusations of blasphemy.

Beginning in June 2014, the Ministry of Youth together with the Ministry of Endowments began a media and re-education campaign to “eradicate” atheism. The initiative was linked to a wider campaign that also targeted “religious extremists”, most of whom were associated with the outlawed Muslim Brotherhood, and there were overt attempts to explicitly associate atheism per se with threats to national security and extremism. The program was aimed at “confronting and abolishing [atheism] through religious, educational and psychological means handled by experts in these fields.”

The backlash against the apparent growth of atheism, increasingly associated with young people and expressed on social media, has come primarily from government leaders and Islamic clerics and scholars. However, in November 2014, it was reported that Christian churches held a joint conference and were “joining forces” with Al-Azhar to fight the spread of atheism. The Egyptian Council of Churches organized, in late October 2014, a workshop for young people discussing the “dangers” of atheism.

In 2017, the Egyptian government took legislative measures in order to mitigate the voices of atheism within the country: the head of parliament’s committee on religion, Amro Hamroush, affirmed that atheism should be condemned as it constitutes an insult to the monotheistic religions: Islam, Christianity and Judaism. He also stated that “atheists have no doctrine and try to insult Abrahamic religions”. This legislative measure has been supported by Al-Azhar.

Mohamed Hisham is a peaceful activist who was forced to leave his country because of his atheist belief. We call the German authorities to grant asylum to Hisham recognizing that he can no longer go back to Egypt.

Humanists International supported Mohamed Hisham in his time at need by connecting him with other like-minded individuals who could support him on the ground and by contributing to his fundraising efforts to secure the possibility of his relocation.

Humanists International remains regularly in touch with Mohamed Hisham and coordinates with him to provide assistance to other activists at risk in Egypt.