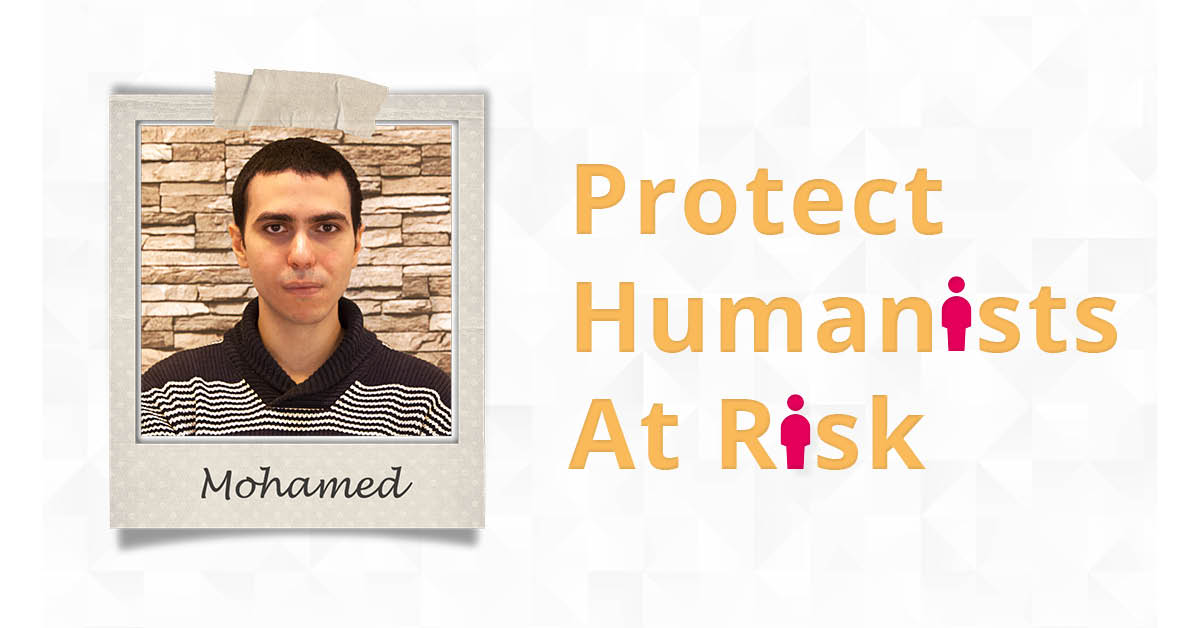 The story of Mohamed Hisham, who found shelter in Germany also thanks to the support of Humanists International

I am Mohamed, an Egyptian human rights activist.

When I was a small child, my parents had a keen interest in my religious education. I attended a school to learn the Koran by heart and I prayed several times a day in a mosque.  Islam took over much of my childhood and my beliefs, but by the age of eight I had already come to doubt the validity of its claims and stories.

I became an agnostic at a young age as I could not find conclusive evidence to support the claims made by religion. However, due to social pressure and the immaturity of my critical thinking skills at the time, I chose to hide my true feelings and became a Muslim again. I actually spent my teenage years on the edge of joining a jihadist group, which fortunately did not happen. 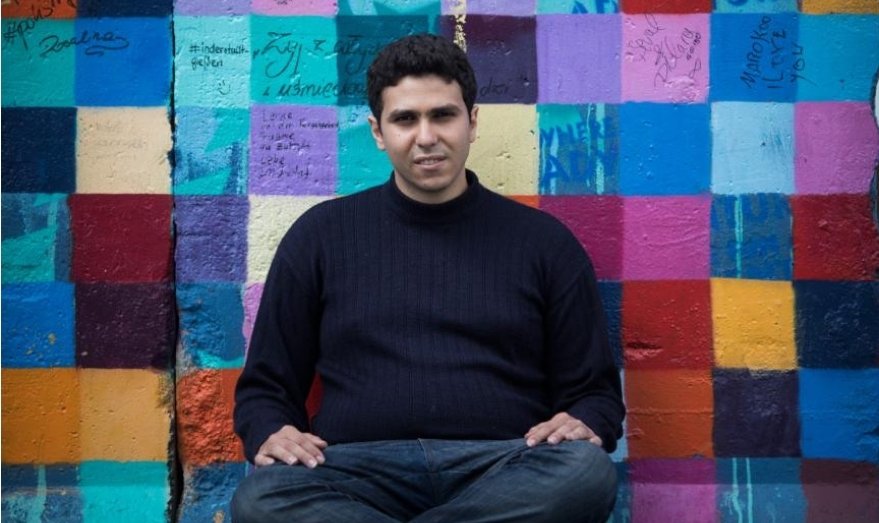 During this time, according to Islamic mainstream teachings in Egypt, basically everything that was pleasant, was forbidden. “Immoral” music and movies, sex with men or women outside of marriage were – and continue to be – strictly forbidden. Such restrictions make a person wish for a shorter life in order to reach Islamic paradise. The sooner the better.

In my late teenage years, I started learning English and was fascinated by the advances of Western civilization in social sciences, technology and natural science. At that time, in my social circles, Western societies were portrayed as notorious for their lack of Islamic morality. But I continued to question myself: if the Islamic way is the “right way”, why are so many Western societies excelling politically and economically?

Driven by curiosity and questions, I began to learn English to broaden my knowledge of Western culture. I fell in love with it and with many of the values that are prevalent in the West, such as the values associated with the Enlightenment period, universal human rights, work ethics, etc. It became clear to me that the doctrine of Islam, which I followed at the time, is irreconcilable with the modern world. This led me into a great internal conflict.

On YouTube, I began to watch various foreign atheists talk about Islam, Christianity and philosophy until I ended up as an atheist in my late teens. Among the reasons why I left Islam was the realization of how Islamic doctrine treated minorities unjustly and imposed restrictions on creativity, something that runs counter to the promotion of stability and freedom that every society needs in order to thrive.

Yet what made me stop believing in a personal God was the imperative of pain, which is assumed to be part of life, the assumption of the existence of a merciful and trustworthy God, and the theory of philosophical determinism. I increasingly found that the assumptions of a personal God were irrelevant to my life and unable to provide answers to philosophical and scientific issues such as the theory of evolution.

For years, I relied on Islam as a compass and a key to the meaning of life. After setting my goals and regulating my behaviour according to Islamic laws, after leaving Islam I found myself in a morally void situation. At that time, I made a great effort to distinguish between right and wrong. Little by little this emptiness was filled with humanist values, where our well-being and that of the whole of humanity – and not that of a “God” – guides our moral compass. 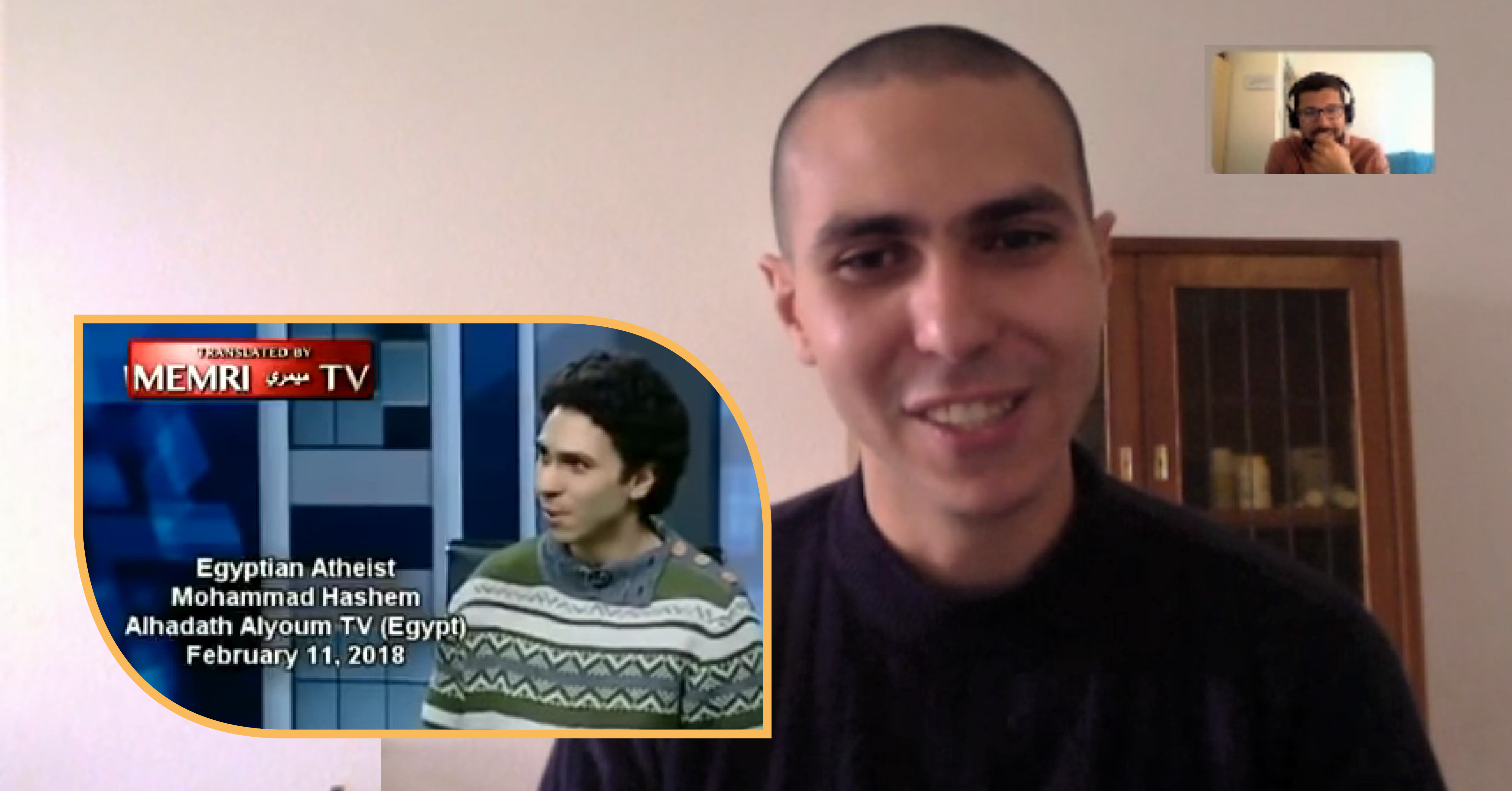 Mohamed smiling during an interview for Humanists International in 2019 – click on the image to watch the video. In the box, Mohamed’s appearance on the Egyptian television in 2018 – the moment that changed his life forever

Gradually, I began to have a humanist view in all aspects of life, and this is what set me free. All the shame and guilt that religion had instilled in me over the years began to fade away. I felt as free as if I was weightless and as if I could fly, but at the same time it was difficult to integrate myself into my community, which was characterized by very reactionary values and attitudes. For example, the persecution of LGBTI people, ex-Muslims and women was accepted and encouraged by many in my social environment.

One day, an article was published in one of our secret atheist Facebook groups about the detention of a group of atheists after they had been reported to the police by their colleagues for mocking Islam. As a result, some Islamist members of parliament proposed a law with provisions that criminalized the criticism of Islam in an even more severe manner than existing law. This resulted in a large public debate and received a lot of media attention. Some TV stations wanted to have atheists as guests to discuss atheism. It was difficult to convince an Egyptian atheist to take part in a TV debate. Such a move carries the risk of imprisonment, travel bans, loss of jobs, and social ostracism, etc.

In my relatively large and active Facebook group, I was the only one who was willing to participate voluntarily. In the end, my desire to contribute to alleviating the injustice we live through was greater than my desire to protect myself. I went to a television show station in Cairo and was full of fear and anxiety. I later learned that the channel was operating under the supervision of the Egyptian secret services, like most Egyptian media. During the show, I explained why I am no longer a Muslim. The host and the former Islamic official in Al-Azhar, the Islamic arm of the Egyptian government, confronted me with insults. After the show I received threats of imprisonment and violence from the public via social media, even from my former colleagues, and there was even violent incidents  involving my friends. 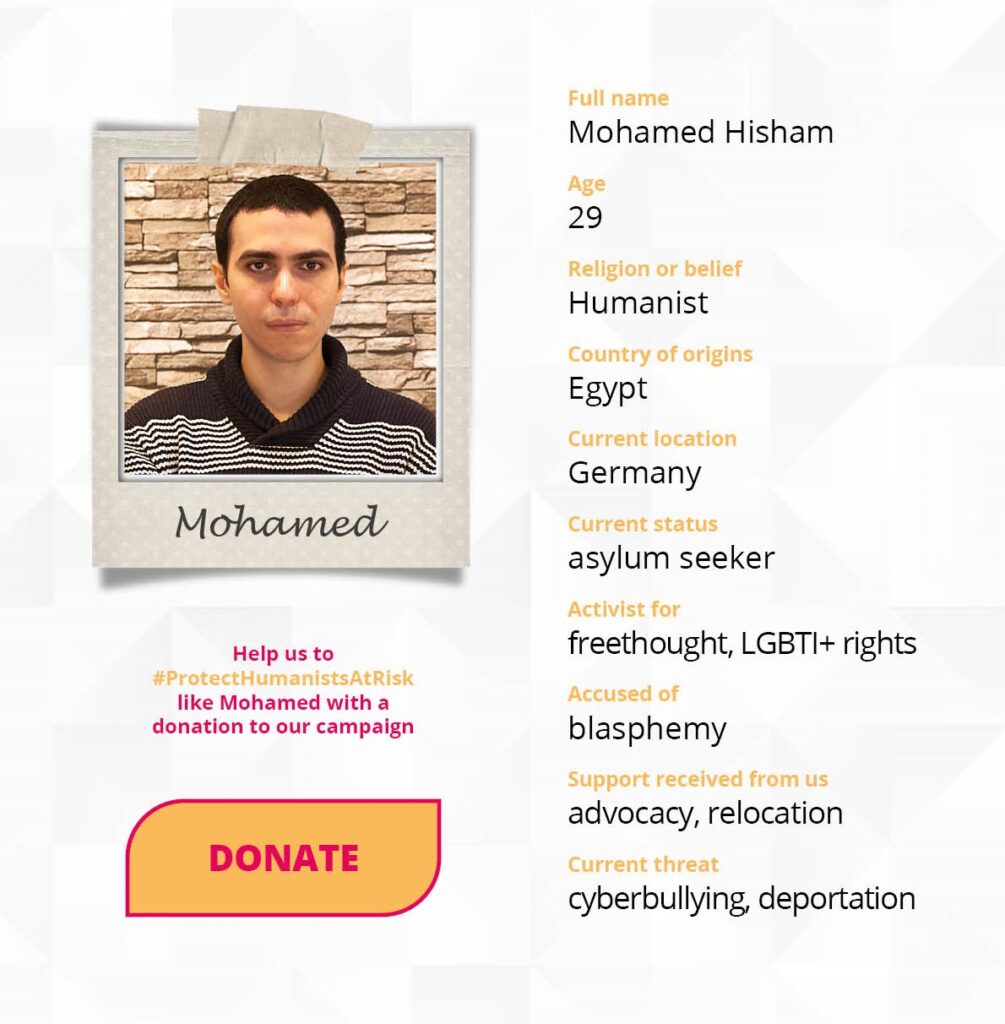 But many people also showed their sympathy for my position, including Muslims from Egypt and even foreigners from the West. I really wanted to express myself more and challenge the current religious situation, but the situation was dangerous and I did not want to end up like my atheist friends who are persecuted by national security and by society. So I kept silent until I would be able to go to a safe place.

Thanks to many generous people and organizations like Humanists International and my dear friend Troy Garneau from Australia, I was able to travel to Germany, where I am free to criticize religion and to contribute to the defence of the rights of LGBTI persons, who are suppressed and oppressed because of religion.

By doing this abroad, I can contribute to a better future for my country without fear for my personal safety or being threatened. But starting a life in a new country is never easy. Learning the language, finding a job and really integrating can be a difficult and exhausting task, especially since it has to be accomplished in a relatively short time. Although the future is currently a challenge for me, I still have a lot of hope.