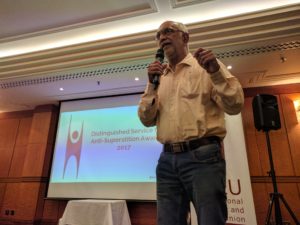 Prominent Indian rationalist, Narendra Nayak, lives under police protection owing to persistent threats to his life as a result of a career spent challenging superstition in the country.

Nayak becomes the victim of a viral smear campaign following the circulation of an audio recording in which a man makes derogatory remarks and incites violence against Nayak, as well as another man. In response, Nayak files a police complaint.

The police dropped charges against the man after he confessed and apologized.

Nayak comes under police protection following serious threats to his life and the discovery of his name on ‘hit lists’.

Humanists International believes that Narendra Nayak is targeted for his peaceful exercise of his rights to freedom of religion or belief and freedom of expression.