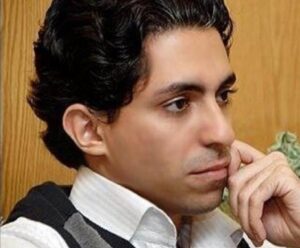 In 2006 Badawi created a website called the Saudi Liberal Network, with the intention of encouraging free political and social debate in Saudi Arabia – one of the only such fora for free communication in the country. In his writings, Badawi advocated for principles of secular thought and liberalism in his writing.

Badawi was convicted in 2013 of “insulting Islam through electronic channels”. He was initially sentenced to seven years in prison and 600 lashes. The following year, his sentence was increased to 10 years and 1,000 lashes. He received 50 of those lashes in January 2015, while the remaining 950 were postponed due to a combination of his deteriorating health and international public outcry.

The authorities have consistently hidden information about his conditions in detention, and his contact with the outside world has been infrequent.

Multiple sources, including Badawi’s wife, confirm that Badawi has been released from prison following the expiry of his sentence. It remains unclear whether he will be able to leave the country to join his family in Canada, due to the 10-year travel ban attached to his sentence. Badawi has no judicial means to challenge the travel ban, other than by a royal pardon.

Raif Badawi’s sister, Samar Badawi, is released after serving a 3 year sentence for her activism.

According to Badawi’s international legal team, around this time Saudi authorities start investigating Badawi on charges of “inciting public opinion” and “damaging the reputation of the country abroad.” (Note: further information about the investigation is not readily available).

Badawi is subject to an assassination attempt in prison. Badawi undertakes another hunger strike to protest the lack of protection afforded to him in prison. Badawi shares a cell with 15 prisoners, some of those have been convicted of terrorism offenses.

The Saudi Arabian government announces its decision to abolish the use of flogging as a punishment. The decision officially means that Badawi will not have to undergo the remaining 950 lashes as part of his sentence.

Badawi’s wife receives news that Badawi has been taken to hospital for treatment, but authorities refuse to confirm the news.

Badawi begins another hunger strike over his mistreatment in prison, including the confiscation of his books and medicine by prison officials and the lack of medical care over pain in his kidneys.

The Canadian foreign ministry calls for her release, and the Canada’s foreign minister tweets that “Canada stands together with the Badawi family in this difficult time, and we continue to strongly call for the release of both Raif and Samar Badawi.” The Saudi Arabian government responds to the tweet by deploying sanctions against Canada, including a freeze on all new bilateral trade and investment, a suspension of all flights to Canada, and an order for 16,000 Saudi students to leave Canada.

Badawi goes on hunger strike because essential medication is being withheld from him. His hunger strike ends when he is eventually taken to hospital

Badawi is flogged 50 times in public before hundreds of spectators in front of Al Juffali Mosque in Jeddah after Friday prayers. Governments around the world, including
the USA, Canada, Germany, and Norway, among others, condemned the flogging.

Badawi’s revised sentence is upheld by the Jeddah Court of Appeal.

Badawi’s sentence is increased to ten years imprisonment, 1,000 lashes, a fine of 1 million Saudi Riyals (approx. US$ 266,616). Following his release, Badawi will be subject to a 10-year travel ban and a 10-year ban from participating in visual, electronic, and written media.

A Criminal Court finds Badawi guilty and he is sentenced to seven years’ imprisonment and 600 lashes for “insulting Islam” through his website and through comments he made on television, under Saudi Arabia’s anti-cyber crime legislation.

During the trial the prosecution originally recommended charging Badawi with apostasy, a crime punishable by death, but this charge was dropped after Badawi stated that he was a Muslim recited the Islamic declaration of faith.

During the trial, Badawi does not have the opportunity to speak with his lawyer, and his lawyer is prevented from attending the hearing in order to plead his case.

His wife, Ensaf, in exile in Lebanon with Badawi’s children, receives phone calls from anonymous individuals threatening to kill Badawi.

Badawi is arrested and detained in Jeddah’s Buraiman prison.

Badawi organizes a “Day for Saudi Liberals” on 7 May, asking citizens to post their vision of a Saudi society online and encouraging open discussion about politics and religion. His lawyer later states that he believes Badawi became a target for the regime after the widespread success of the day.

The prosecution service in Jeddah charges Raif Badawi with “setting up an electronic site that insults Islam,” and refers the case to court, asking for a five-year prison sentence and a 3 million riyal (approximately €600,000) fine. Badawi is interrogated by religious police and his house is searched, but the investigation against him is eventually dropped.

Badawi was born in Khobar, in 1984. He attended school until the age of 13. Around that time, his father reported him for parental disobedience and he was sent to a teenage detention center for six months, where he faced harsh punishments and religious indoctrination.

Badawi’s writing is inspired by many freethinking Arab intellectuals with liberal views, such as Mohammed Saeed Tayeb. Celebrated internationally for his work, Badawi has been recognized with Reporters Without Borders’s Press Freedom Prize, with PEN’s Pinter Prize and One Humanity Award, with the Franco-German Journalism Prize, by the International Publishers Association. Extracts of Badawi’s writings can be read here.

Badawi married his wife, Ensaf, in 2002. Ensaf and their children live in Canada. Haidar continues to campaign for her husband’s release from Québec, where she maintains his official Twitter account.

Freedom of religion or belief is extremely oppressed in Saudi Arabia. Wahhabism – commonly described as an “ultra conservative” or “fundamentalist” branch of Sunni Islam – is functionally recognized as the state religion. The country’s laws are based on Sharia law.

Saudi laws amount to an amalgamation of Sharia, royal decrees, and fatwas issued by the Council of Senior Religious Scholars. In addition to the typical offenses of desecrating a Qur’an or insulting the Prophet Muhammad, a wide variety of crimes can be labeled as blasphemy.

Apostasy is criminalized and mandates a death penalty. The criminal accusation of “apostasy” is sometimes deployed against people (including writers, activists, artists, or lawyers) who show any serious sign of pushing at the outer boundaries of freedom of expression, or who are critical of the religious authorities, and whose views (rightly or wrongly) are termed “atheist” or as “insulting to religion”. These laws are actively utilized (see Highlighted cases, below).