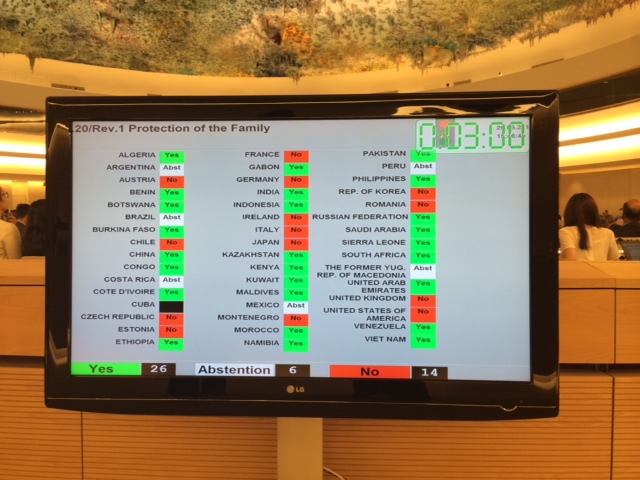 IHEU’s head of delegation to Geneva, Elizabeth O’Casey, blogs on a worrying development at the UN: the euphemistic “protection of the family”

Naming and shaming: the UNHRC member states in green voted for a narrow, conservative definition of “the family”

Last week, the United Nations Human Rights Council voted in favour of a resolution on “The Protection of the Family” (you can view it here, thanks to the Society for the Protection of the Unborn Child (SPUC) who no-doubt gleefully uploaded it online immediately).

On the face of it, the resolution sounds nice enough; as Bob Last of the British Mission to the UN in Geneva has said (amidst talk of the epicurean delights of carbohydrates), it’s hard to find anyone who doesn’t think ‘the family’ is a good thing (however we choose to understand that vague and rather fluid concept).

The intentional nature of this was made apparent when a simple amendment, tabled by Chile, Uruguay, Ireland and France, which merely sought to underline that in “different cultural, political and social systems various forms of the family exist”, was not discussed, after Russia brought a “no action” motion which was adopted by a 22-20 majority. Russia was on fine form; not only did they reject an amendment that would have simply defined the family in a more pluralistic way, but they also managed to censor the debate on the amendment altogether.

Crucially the resolution ignores the fact that the individual’s rights are already protected by a plethora of human rights instruments. By emphasising instead the unit, it risks ignoring the rights of individuals within that unit and even legitimising the abuse of those rights so long as they happen within the family. This is particularly worrying when we consider that so much violence against women and children occurs within the family set-up.

Another question of course, is what the resolution’s sponsors are seeking to protect the family from? This is where the motivations for such a resolution come in to play.

For, behind this resolution is something more sinister than a mere concern for the family, it is representative of an increasing trend by those seeking to undermine the rights of certain individuals, using the UN human rights framework to do so. In reality, the resolution is a reaction to the Council’s resolution on sexual orientation passed in 2011. For, not only are the sponsors seeking to enable the family to control the individuals within it but they wish to legally reinforce the conservative and traditionalist concept of the family constituted by a man, a woman and children.

As pointed out in an excellent blog on the issue by Andrew Smith of Article 19, in an informal meeting on the text the Pakistani Ambassador made explicit the concerns motivating the resolution: he helpfully elaborated on the definition of the family assumed by the resolution as meaning “a man, a woman and his children”. He continued by suggesting that the resolution was essential “to protect against any pollution of the family”.

Essentially, the resolution turns upon a desire to undermine the human rights mechanisms protecting LGBTI people and the right to sexual and reproductive autonomy of women. The notion of ‘the family’ is gaining currency as a tool with which to do this, and works side-by-side with the notion of ‘traditional values’ in its efforts to re-orient the human rights framework toward a traditionalist, conservative, and often religious understanding of sexuality. As observed by Smith, the protection against the “pollution” of which the Pakistani Ambassador spoke has been the undercurrent for many of the deeply discriminatory anti-LGBTI laws recently enacted in Russia, Uganda and Nigeria, and for “the language that supports continued criminalisation of lesbian, bisexual, gay, and transgender identities and expression in 81 other countries”.

The group behind the resolution is ‘Friends of the Family’; who, according to the director of SPUC,  are “sick and tired of the constant bombardment from European and other first world member states about same-sex marriage, contraception and abortion”.

The resolution also turns upon a sort of nauseating essentialism, defining the family as the “natural and fundamental group unit of society”. This is not only not a self-evident fact given that we remain divided on what constitutes such a unit, but it uses a sneaky and dangerous naturalistic argument which supposes that this truth about ‘the family’ found in nature assumes some sort of moral duty as expressed through rights, towards that ‘family’. Incidentally, it was this was this type of naturalism that was so cutely invoked in the European context recently by the insidious ‘One of Us’ initiative.

The initiative, which was a petition-based campaign organised and promoted by religious conservatives and officially supported by the Pope, sought a cut to all EU funding for embryonic stem cell research and IVF treatments involving the destruction of embryos.

When defending the initiative at the European Parliament, spokesperson Gregor Puppinck, argued that life starts at conception, therefore it is from conception that the embryo’s ‘right’ to life must be protected. Describing the existence of ‘life’ doesn’t automatically describe a being in possession of a moral personality with rights.

Beyond its vulgar essentialism, this resolution, as ever, is about politics; it’s about state sponsors diverting attention away from their own human rights failings, such as in Egypt or Sri Lanka, and it’s about a widespread movement insisting on undermining the rights LGBTI people and perpetuating a society in which women are controlled within the private sphere of the family. It might also be noted that the committee (currently featuring the likes of Pakistan, Russia and China) who decides which NGOs should be accredited with UN speaking rights, has accredited that privilege to thousands of organisations, but only a handful of them are LGBTI groups.

In a human moment during the Council’s debate on the resolution and the suggested amendment, the UK Ambassador to the UN in Geneva, the estimable Karen Pierce, said “I do not see how those who voted against the proposed amendment can look a child in the eye and tell them that because they do not come from an imposed model of a family that they somehow don’t belong to a real family”.

And that’s the point really, that’s why the Council exists. So that its members can look every person in the eye, particularly the young and vulnerable, knowing that they are working to protect their rights, whoever their parents, whoever they love, whoever they are.

The Council failed in this purpose by supporting Russia’s cynical “no action” motion and passing the resolution. The result is that the resolution’s language will be available to build upon in the future for those who seek to push their anti-universalist conservative agenda. It also means that there will be a panel discussion on the issue of ‘protecting the family’ at the next Human Rights Council session. The International Humanist and Ethical Union will be there to speak out, but these stealthy moves from those who seek to undermine the rights of so many will continue and the UN, and the international civil society more generally, need to be more robust in exposing this pernicious agenda for what it is.