“Hello Humanists!”: a new travelling vodcast about humanists in Asia

A new video series launching today will introduce humanists in Asia to each other and wider world. We talked about the project with the two founders of Filipino Freethinkers, Red Tani and Kristine Chan.

Filipino Freethinkers is a humanist organization founded in 2009 to promote reason, science, and secularism in the Philippines. They joined Humanists International in February 2019 and we immediately began a fruitful collaboration, organizing a Café Humaniste in April and successfully applying for a Humanist Regional Hub Grant to create and deliver a new international video podcast called “Hello Humanists”, to be officially launched today!

The first episode can be viewed below via the Filipino Freethinkers YouTube channel. The full playlist is available here.

Here’s our exclusive interview with the founders of Filipino Freethinkers founders, who also just so happen to be the humanist movement’s newest vodcasters.

Humanists International Membership Blog: Filipino Freethinkers have a great experience of video podcasting (“vodcasting”), but in particular what motivated you to create this new format, “Hello Humanists”? 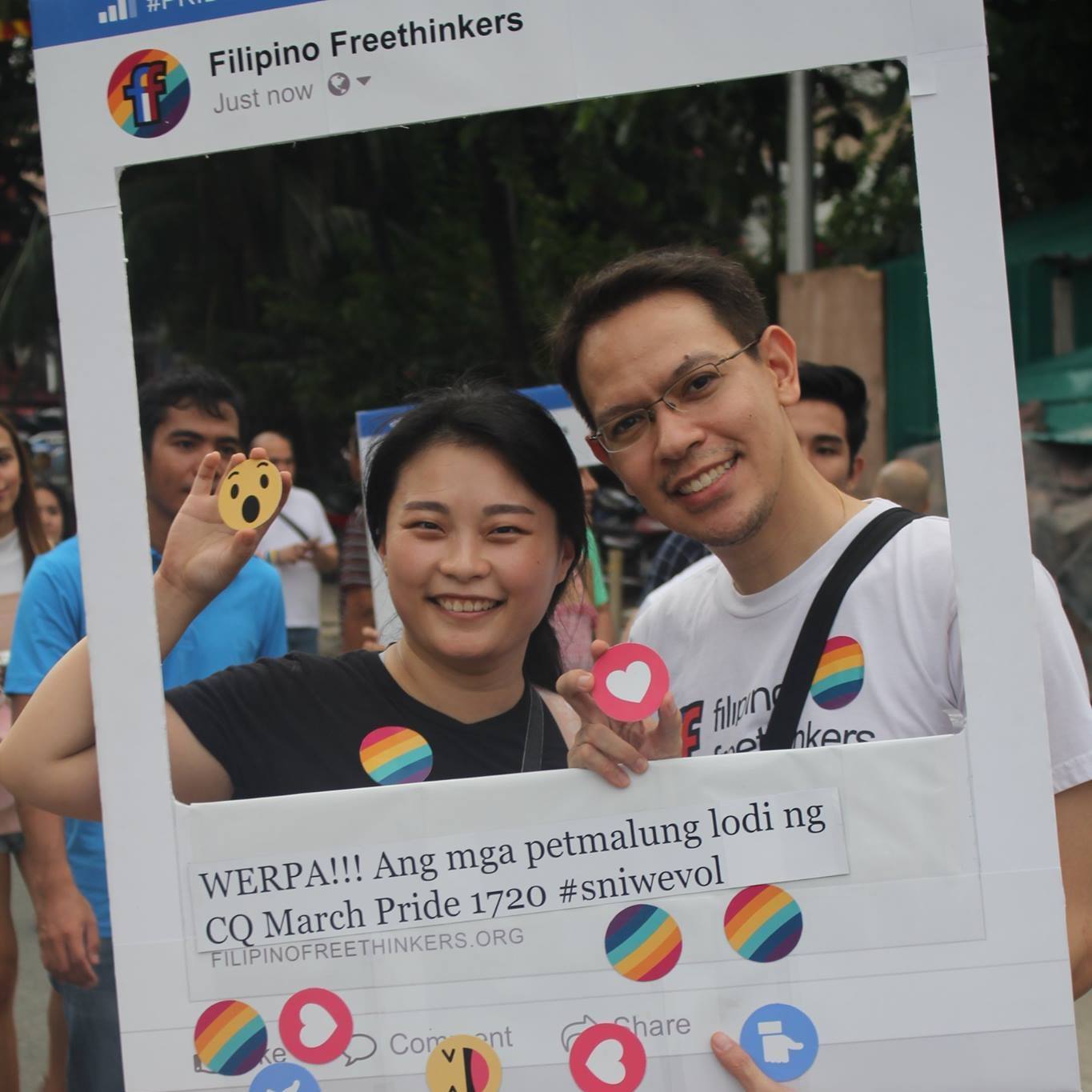 Kristine Chan and Red Tani at 2017 Pride March in Manila

Kristine Chan: When we saw the announcement of the 2019 Humanist Regional Hub Grants we decided to expand our scope beyond the Philippines and to “internationalize” our format, since we think that what is true for the Philippines applies also on a larger and global scale.

Although all humanists share some values and outlooks, each person is ultimately different. To anyone interested in understanding such differences, one of the best ways to start is to explore the places they live in — how it has influenced and continues to change the individual.

This is what motivated us to create Hello Humanists, and we’re very grateful for the support of Humanists International.

HIMB: Tell us more about the project, its goals, structure, etc.

Red Tani: We aim to record and publish at least 21 episodes – the first seven episodes are going to be released in the next two months, one new video on each Friday.

With each episode, we want to showcase the diversity of humanists in Asia and the contexts they live in. We want to contrast places where it’s easy to thrive — and even be an outspoken advocate for humanism and humanist values — with places where it’s difficult and even dangerous.

We hope that this not only raises awareness about the different humanist contexts in Asia but also sparks conversations, helping to grow the communities both locally and internationally. The conversations recorded on video can also serve as a springboard for researchers who want to have qualitative insights into related issues.

Finally, the networks formed from our conversations will help everyone involved to connect better with each other to collaborate on future projects or to just share solidarity in the joys and challenges of living as a humanist. 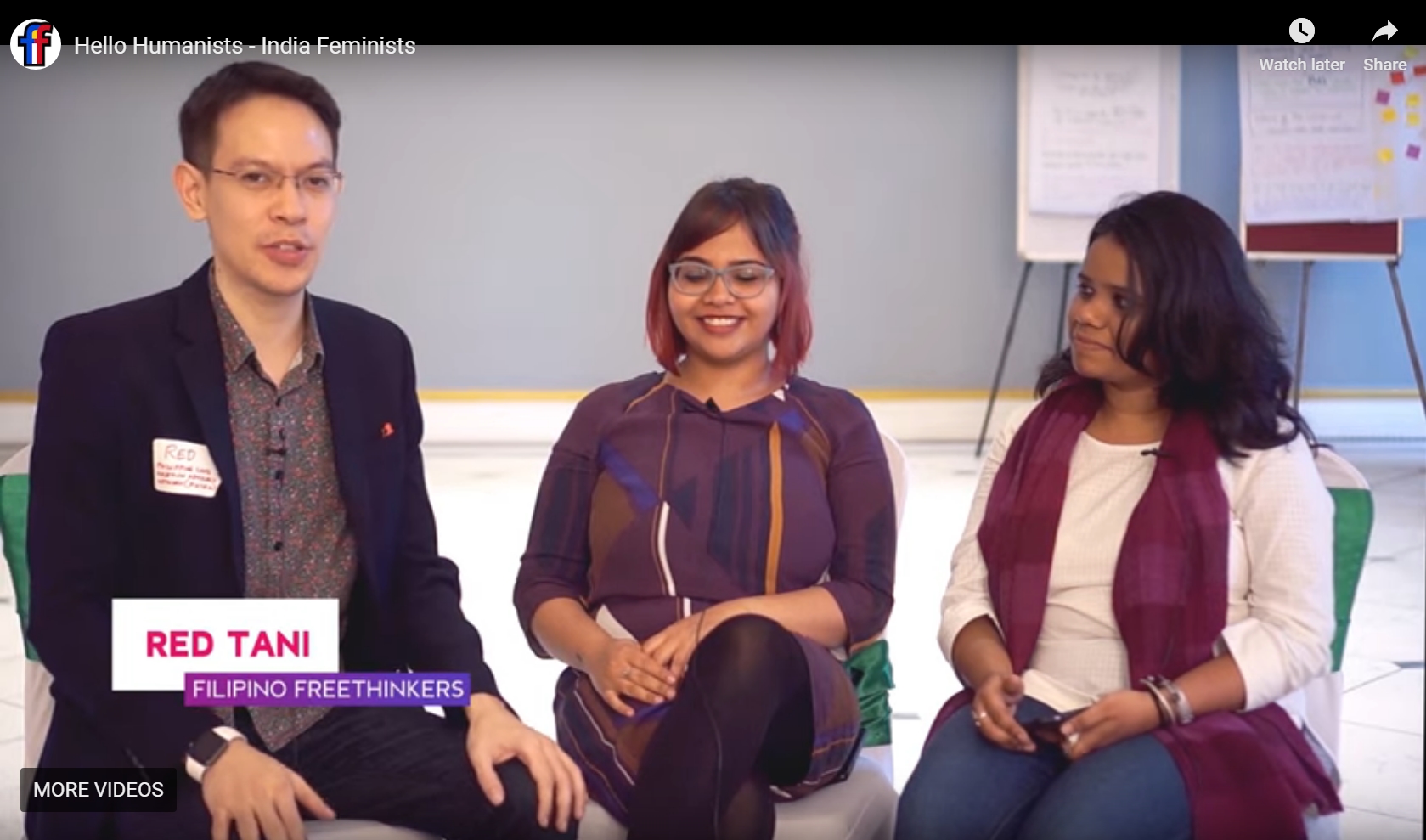 HIMB: How many countries did you visit up to now? And how many activists did you interview so far?

KC: Up next, we’re visiting Taiwan and Japan. We’re still coordinating with the people we’ll talk to in these places – if you have any suggestions, please contact us at secretary@filipinofreethinkers.org.

Finally, Hello Humanists was made possible with the support of Humanists International. Thank you so much for your collaboration, and we look forward to more creative endeavours in the future.

HIMB: Thank you Kristine and Red, and congratulations once again!

KC & RT: Thanks to you, it was our pleasure!

Follow the Facebook pages of Filipino Freethinkers and of Humanists International where all episodes of the Hello Humanists series will be published in the coming weeks and months! 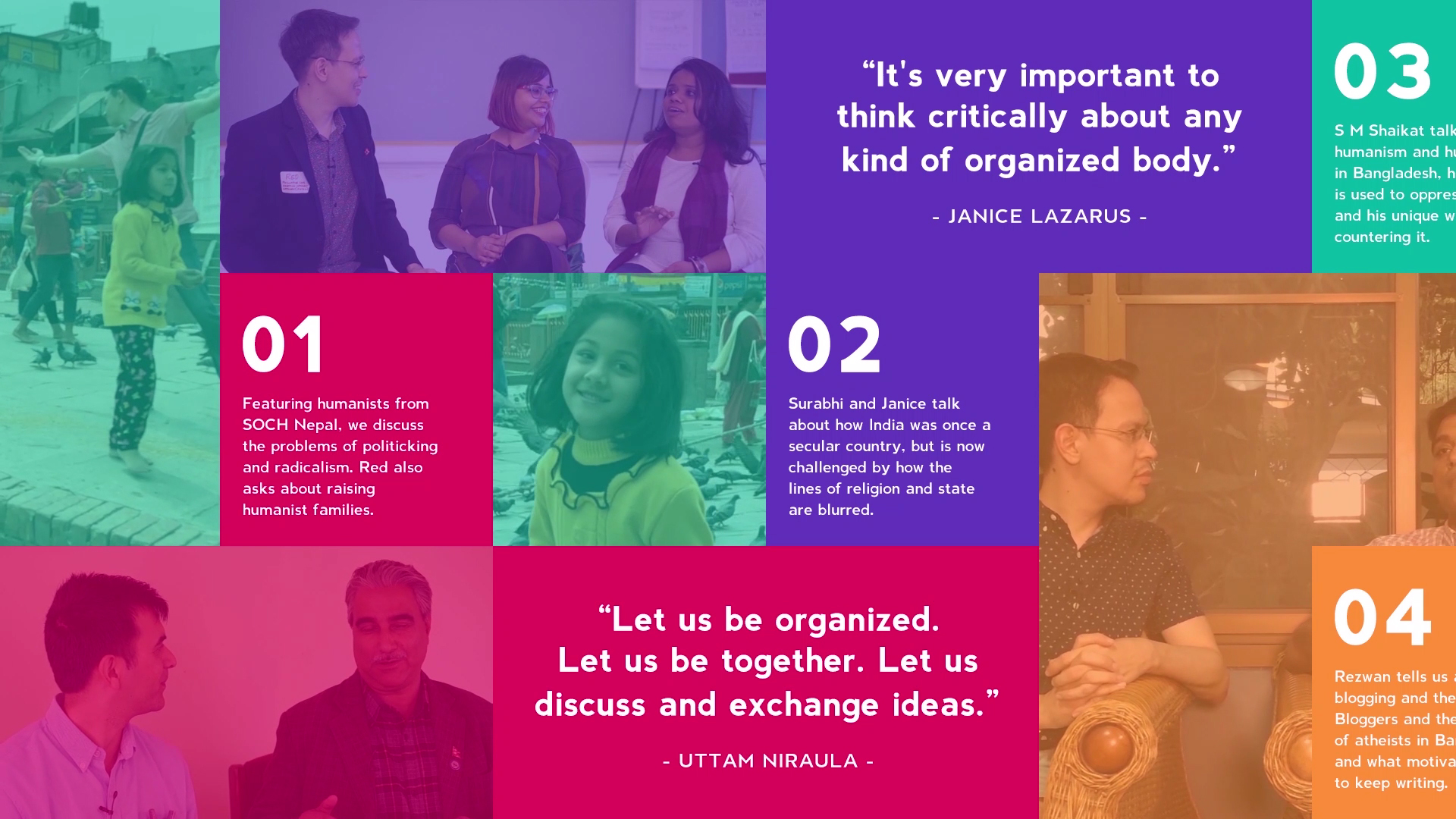