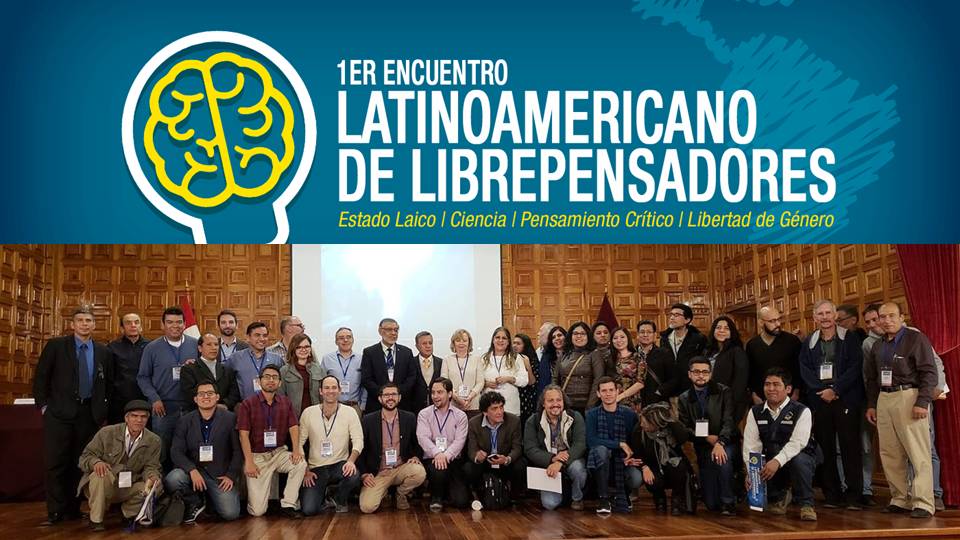 “Humanists united will never be defeated!”: what I learnt from humanists in Latin America

17 days, 4 countries, 5 conferences, hundreds of secular activists met: these are only few of the numbers summarising my recent visit to Latin America.

I think I can already say that the tour has left a legacy. It created new fellowship: I met with many new secular activists and organizations, from Mexico all the way down to Argentina, passing from countries like Honduras and Costa Rica, where Humanists International has not previously had any Member Organizations but where I now believe we will soon see fresh applications for the very first time. It created new interest in humanism as a whole: at each conference or event, I met people who in the first place didn’t even know the meaning of the word “humanism”, but who left the venue defining themselves humanists. And it brought humanists together from across the region: thanks to the support of Humanists International, the first Latin American Free Thought Meeting in Arequipa has been a huge success, as you can from the number of speakers in the photo below.

All the speakers of the first Latin American Free Thought Meeting, held in Arequipa, 24-26 May

When I arrived in Guatemala I already knew how active and well-organized the humanists here were. Meeting them in person and seeing them at work just confirmed this conviction.

Humanist Guatemala, Humanistas Guatemala, is the only organization in Latin America yet to have a paid staff – and what an amazing staff they are! They rightly conceive humanism as a positive and independent lifestance, which cannot be reduced to ‘opposition to religion’. But in a country with a history of religiosity and confessional Catholicism and Protestantism, the idea of positive human values outside of a religious framework is novel to many people! The message of one of Humanistas Guatemala‘s most successful campaigns well represents this idea: “You don’t need a god or a religion to be a good person. If you agree, then you’re not alone.” 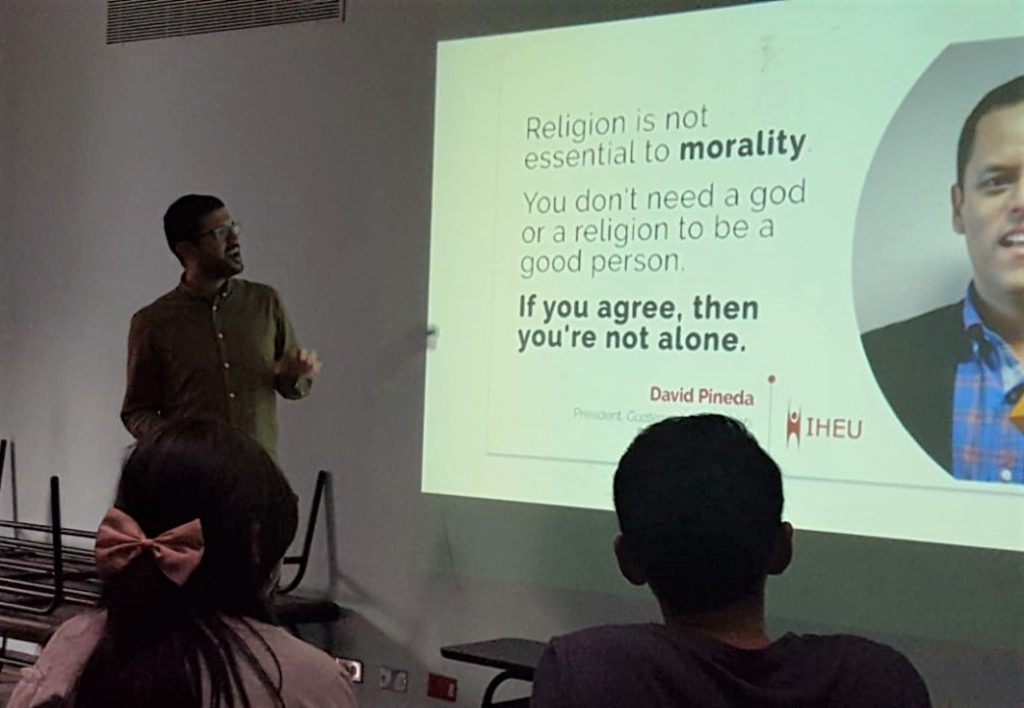 As you can see in the photo above, the same slogan showed up during the Café Humaniste event on Saturday, which also included the showing of the film Ensueños Blindados (“Armored Dreams”), a documentary about the coup d’etat in Guatemala in 1982. This gave us the opportunity to reflect on the persistence of high discrimination and inequality in Guatemalan society, which remains “by far one of the most violent countries in the world”, as stated by Carlos Mendoza, a member of Humanistas Guatemala and founder of Diálogos, the Guatemalan Observatory on Violence. 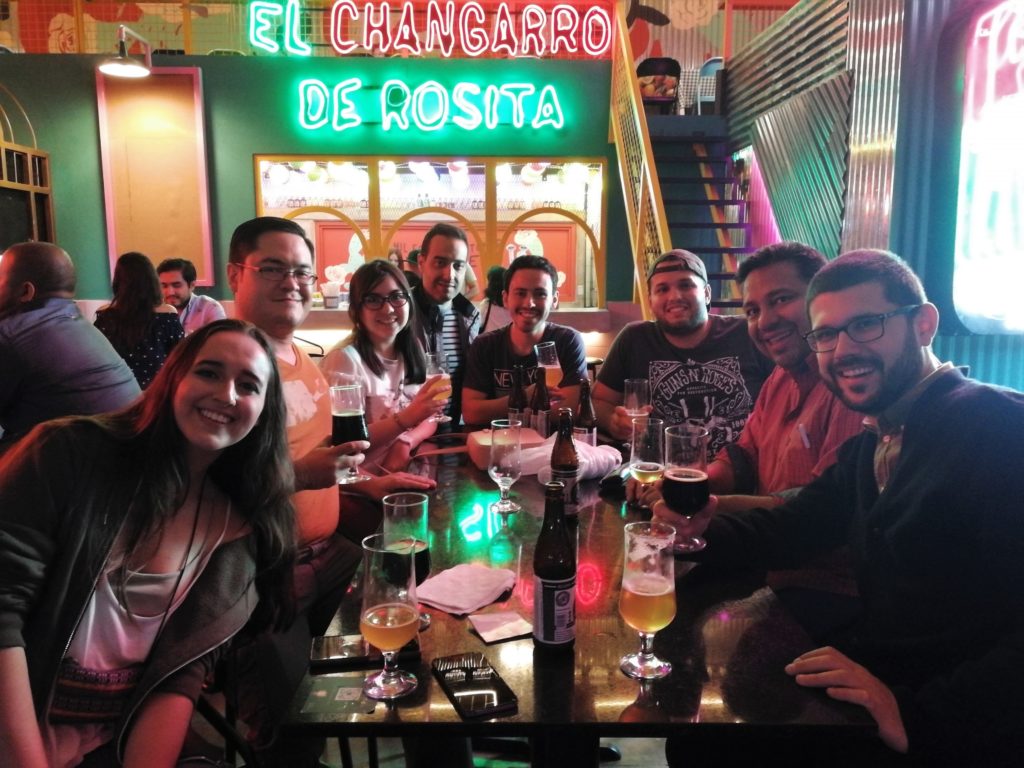 Ideas & chelas, that is, the “drinks” after the “ideas”

After the film it was time to pay homage to one of the most typical tradition of Humanistas Guatemala, who believe that “ideas” should always be accompanied by “drinks” – “ideas & chelas” is the subtitle of every Café Humaniste organised by them.

This has proven to be a winning strategy because it manages to combine a moment of serious debate with a more informal and sociable chat with like-minded people on different themes, reflecting the true spirit of Humanists International’s Café Humaniste series. 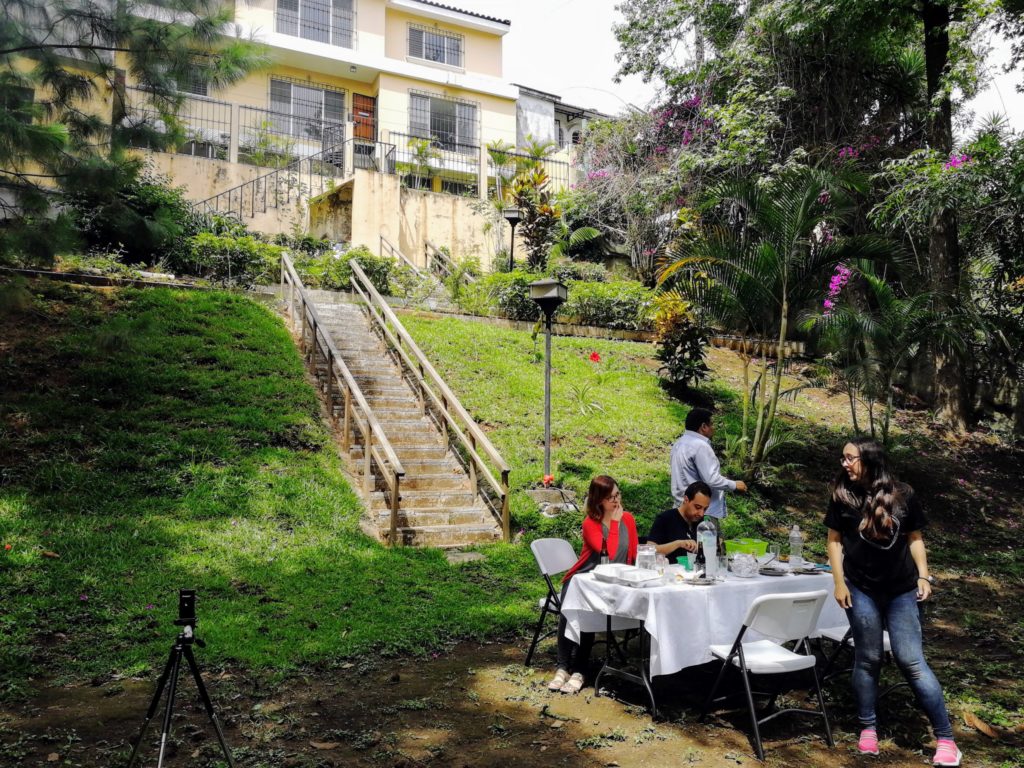 Outside the headquarters of Humanistas Guatemala

Monday morning, before the flight to Bogotá, I interviewed the staff of Humanistas Guatemala in their marvellous headquarters immersed in nature, where (as you can see) we also had an amazing lunch with tortillas, avocado and other typical Guatemalan food. 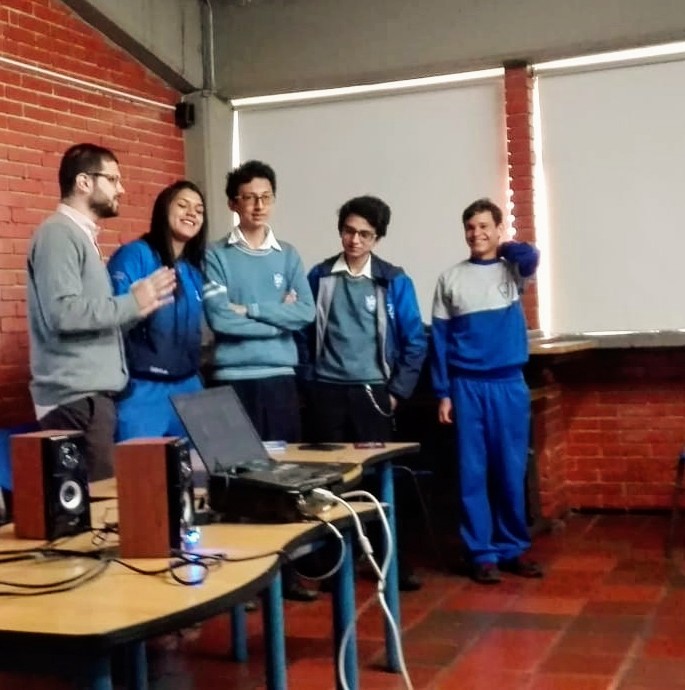 A moment of the “sceptic alien” thought experiment, with the four students acting as theologians

The stop in Bogotá was intense. Still under jet lag, I woke up at 5 AM to cross the whole of Bogotá in a small, overcrowded bus, together with Ferney Rodríguez Vargas, the president of Atheists Bogota, Bogotá Atea. We woke up that early because we needed to reach the school where Ferney teaches Biology, and there in Colombia school starts at 6.20 AM.

Ferney managed to organise a two-hour workshop about philosophical scepticism with around 70 students (15 to 18 years old). To break the ice we watched a clip of South Park on homeopathy and pseudo-science, then Ferney introduced the students to the importance of scepticism and critical thinking. When it was my turn, I decided to use a more Socratic approach and to perform with the students a thought experiment that I named “the Sceptic Alien”.

I pretended to be an alien landed for the first time on the Earth, precisely in the middle of an International Inter-Religious Congress. I called “on the stage” four volunteers, asking them to act as theologians of different religions – Catholic, Muslim, Hindu, and Jewish. As an alien I pretended to know nothing about any God, so I asked each of the theologians to describe to me their respective God. When the round of presentations finished, I asked all the students who would I have to agree with and, most important, why.

The response of the students was really intense and reasoned. Most of them agreed that, by relying on logic alone, it was impossible to determine which one was the “true God”, and that scepticism was actually the wisest stance to take in this case. One student suggested that all the different gods could be different manifestations of one only God, what philosophers call “syncretism”. But nobody went for the “monotheistic” approach, not even one student. 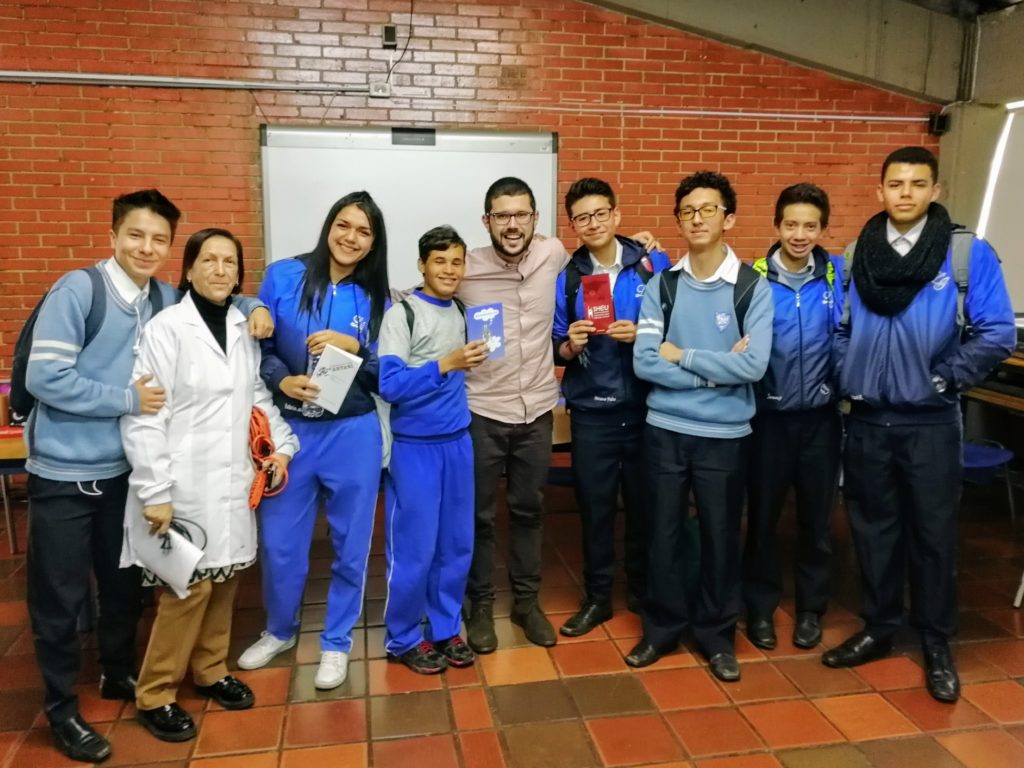 After the experiment, we started talking about Humanism, freedom of religion or belief, the work of the Humanists International and our member organizations around the world. At the end of the debate, I awarded the two “best philosophers” with a copy of Patrick Lindenfors’ “God Probably Doesn’t Exist” and a copy of my book on “Atheism and Philosophy without Gibberish“. But even after we all left the classroom, some students followed us to the cafeteria, because they wanted to keep talking about philosophy, their university prospects, their doubts about religion… Their interest was itself an inspiration! 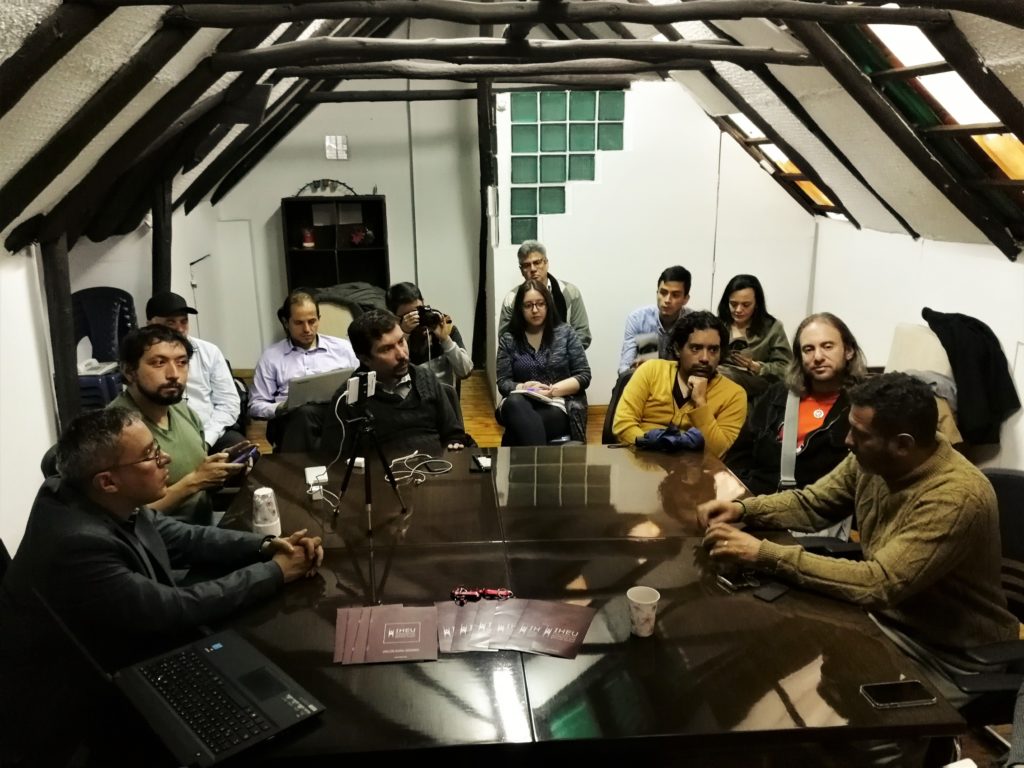 A moment of the secular meeting in Bogotà

After the school I interviewed different members of Bogotá Atea and of the Association of Atheists of Bogotá. There were a lot of common points in their replies: how atheists feel when they are living in the most religious country of all Latin America; the discrimination against atheists, women and LGBT people on the part of the Catholic and Evangelical churches; the hard fight to promote to fellow Colombians the idea that secularism is not against religion but a benefit for the sake of all citizens.

These arguments were all revisited during the meeting we had later on in the Rincon Perfetti studio, with a team of international lawyers specialising in civil and secular rights. (The streaming of that presentation and the following debate is available on Facebook.)

I arrived in Arequipa the day before the first Latin American Freethought Conference. It was 11 PM, but I couldn’t miss the welcome party chez Hector Guillen, one of the organizers of the event (for an idea of the amazing “Latin” atmosphere take a look at this video). 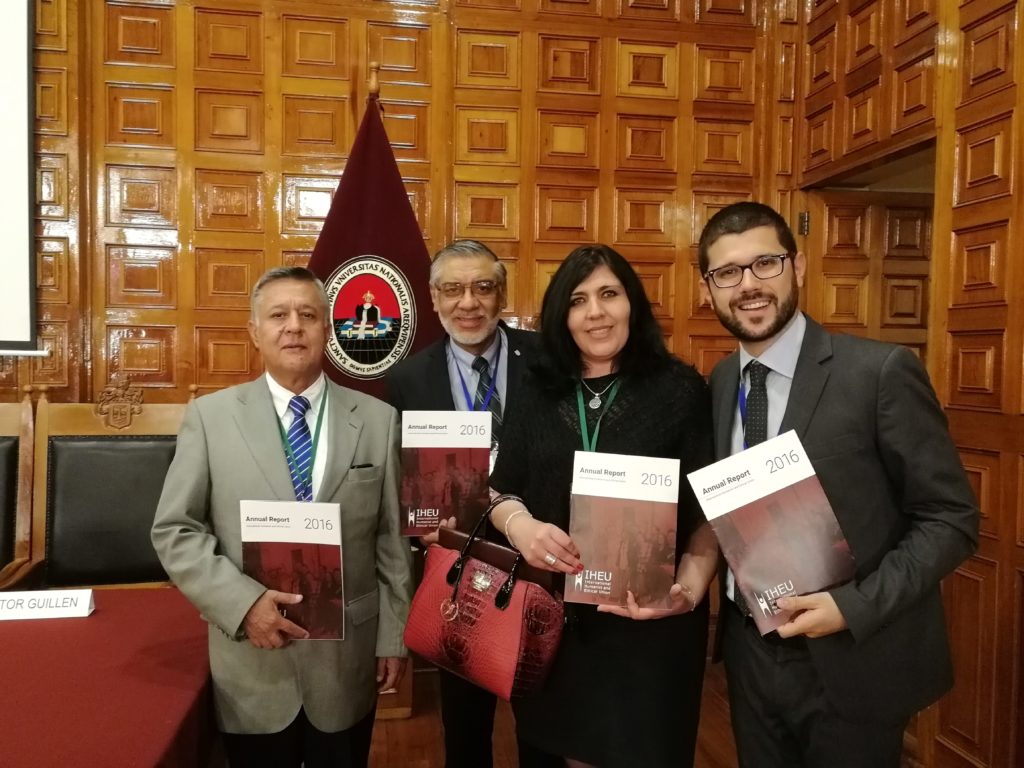 The conference took place from Thursday 24 to Saturday 26 May. Three days of presentations and workshops, with 5 main panels on Secularism, Critical Thinking, Pseudosciences, Gender Equality, and other humanist themes: the whole meeting was live-streamed on the Facebook page of the Encuentro, thanks to the funding of a Humanist Regional Hub grant from Humanists International. 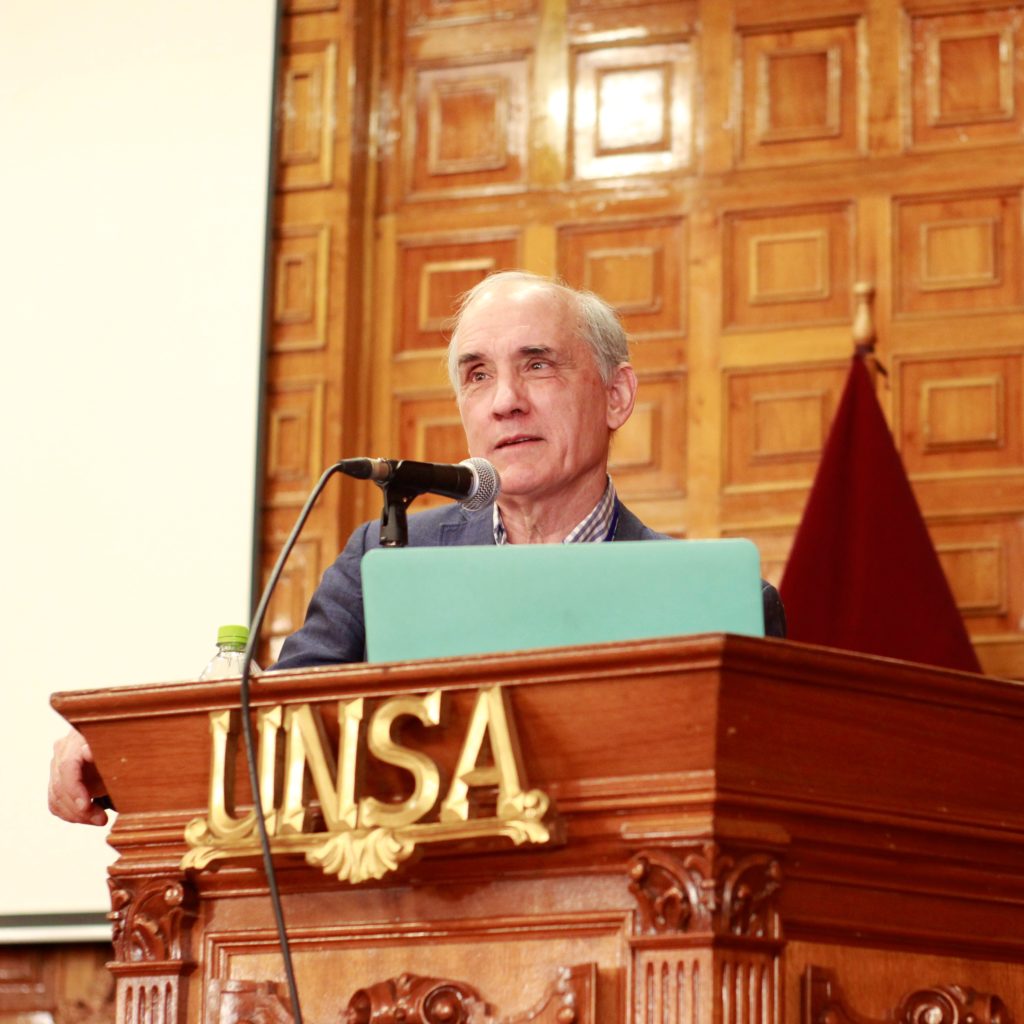 The opening speech was given by Dan Barker, Co-President of the Freedom From Religion Foundation, one of the biggest secular organizations in the United States. Dan spoke in fluent Spanish about his personal experience as a former evangelical Christian preacher and about FFRF’s remarkable work in favour of the separation of Church and State and the promotion of critical thinking. 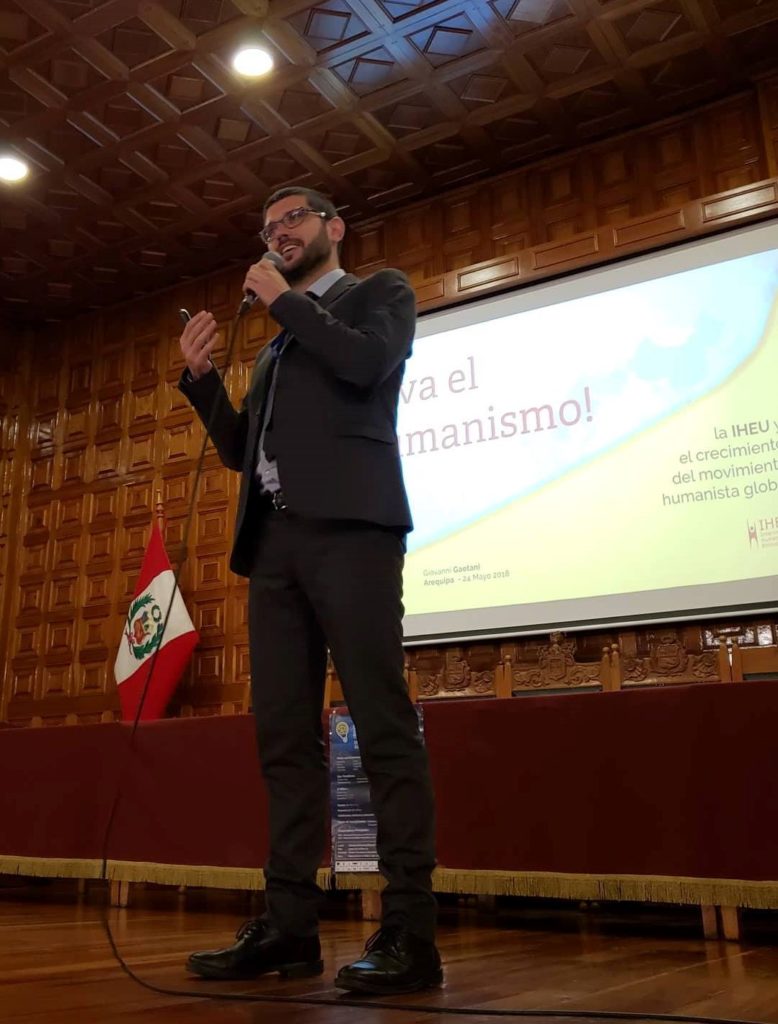 A moment of my presentation in Arequipa

The conference was so long and intense that it would be impossible to recall everything in few words, but I can say that it was an overwhelming success, which definitely strengthened the humanist and secular movement in Latin America. From Mexico to Argentina, there is now a solid and established network of secular activists who recognize that, despite all cultural and political differences, they are all carrying on the same endeavour. 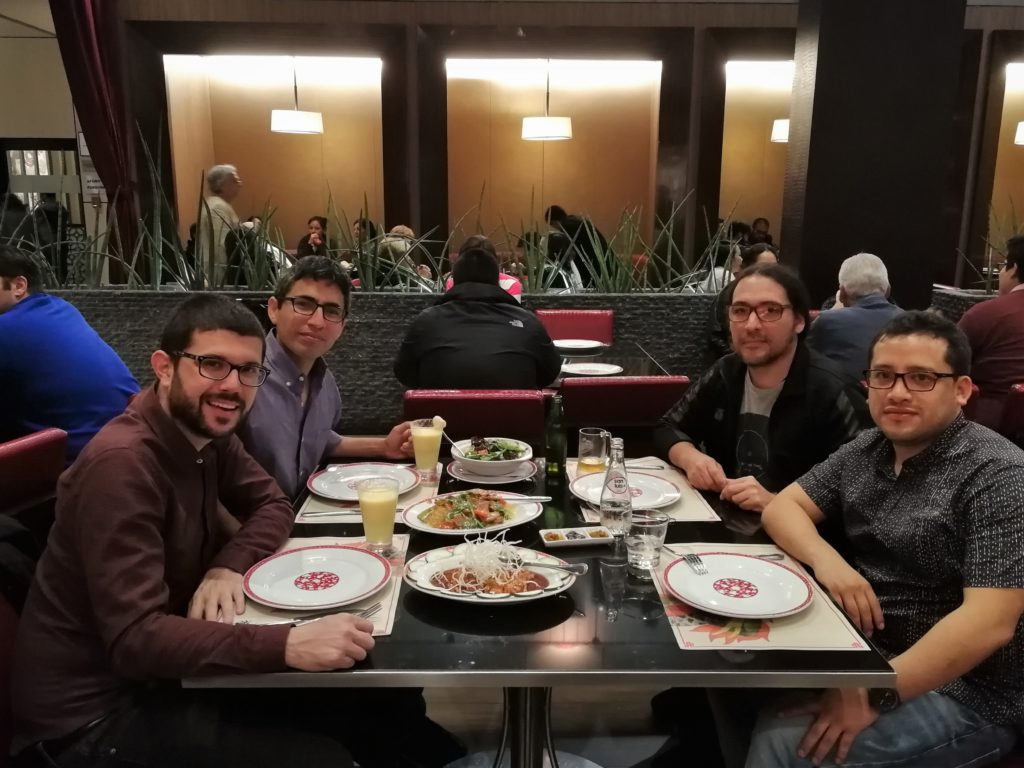 Dinner with the Directors of the Atheist Association of Peru

After Arequipa, I spent one day in Lima, where I had the chance to meet and interview representatives of three Humanists International Member Organizations in Peru: the Atheist Association of Peru (APERAT), the Secular Humanist Society of Peru (SSH) and the Rationalist Humanists of Peru (HURA-PERU).

The last short stop of the tour was in Santiago, Chile, where our new Chilean members, Secular Action, Acción Secular, in collaboration with the Skeptic Association of Chile, Asociación Escéptica de Chile, organized a seminar on secularism in Chile and around the world. Before the event began, I had the chance to interview representatives of all organizations, including the Atheist Society of Chile, Fundación Sociedad Atea Chile. (Videos from these interviews will be available soon.)

Marcos Telias, President of Acción Secular, opened the event with a talk on their important ongoing campaign in favour of a secular education in Chile’s public schools. The campaign, “Educacion Laica“, is achieving great results, in part thanks to the unexpected endorsement of some religious groups. 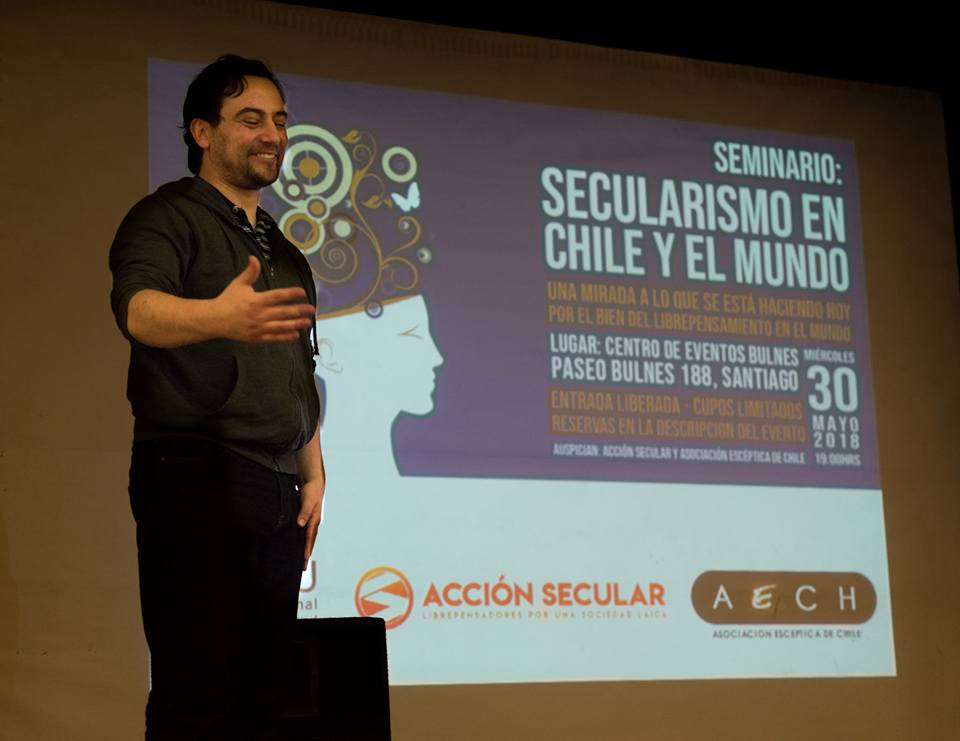 After Marcos, once again I spoke about the global humanist movement, the work of Humanists International, and the campaigns of our Member Organizations. And once again it was astonishing to see how the public positively react to it. 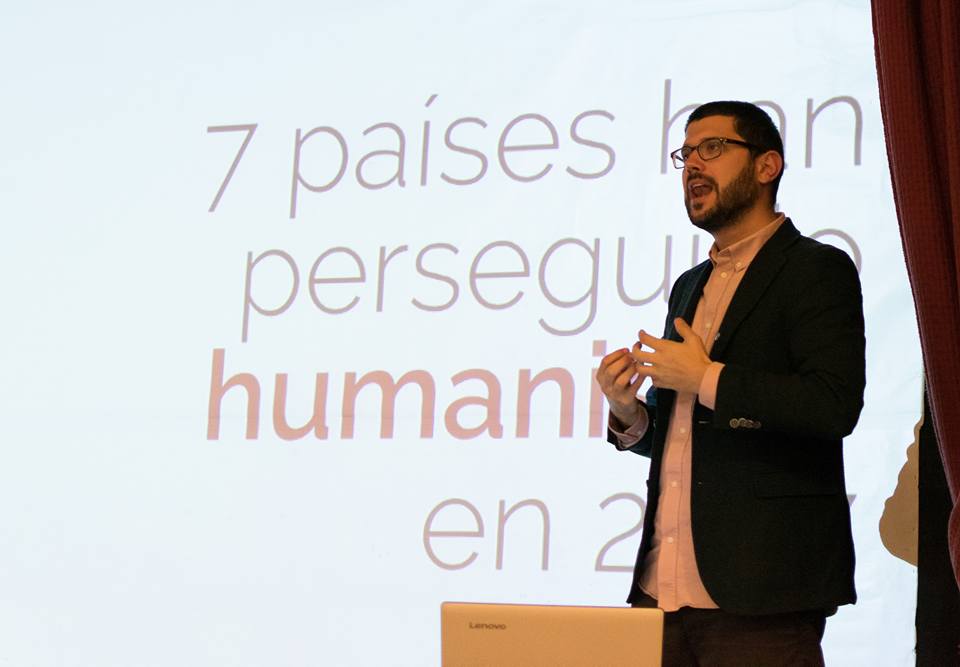 A moment of my presentation in Santiago 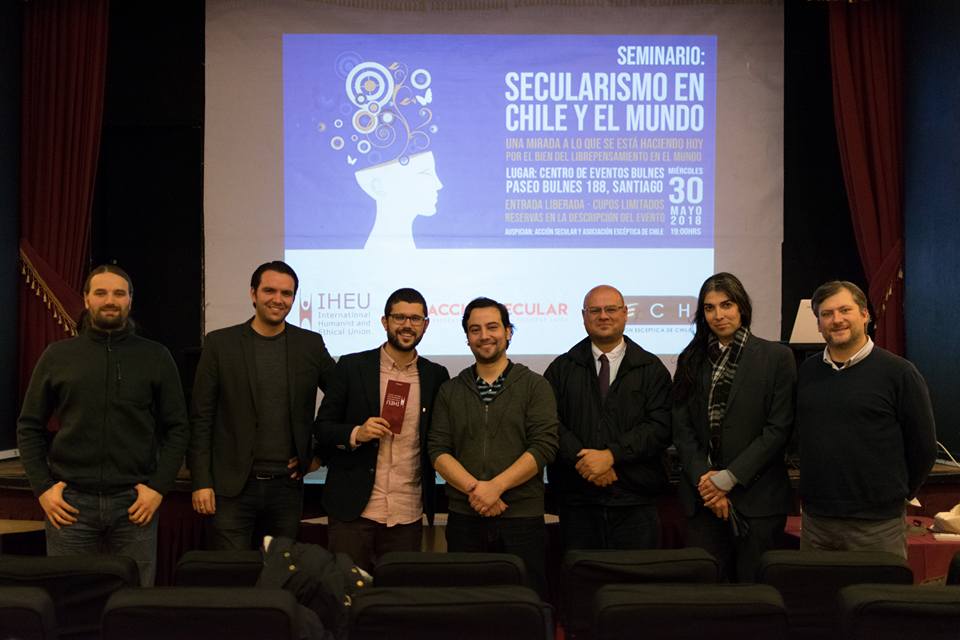 A photo at the end of the seminar

Conclusion: the regional approach is working

When in 2017 Humanists International started implementing a new growth and development plan, focusing on Latin America as our priority region, we could hardly imagine that all of this would have been possible. Humanists International’s approach of strategic regional focus for growth and development activity is working, and it is returning immediate results. One of the main outcomes, for example, is the fact that in just one year we managed to double the number of our Member Organizations in Latin America. 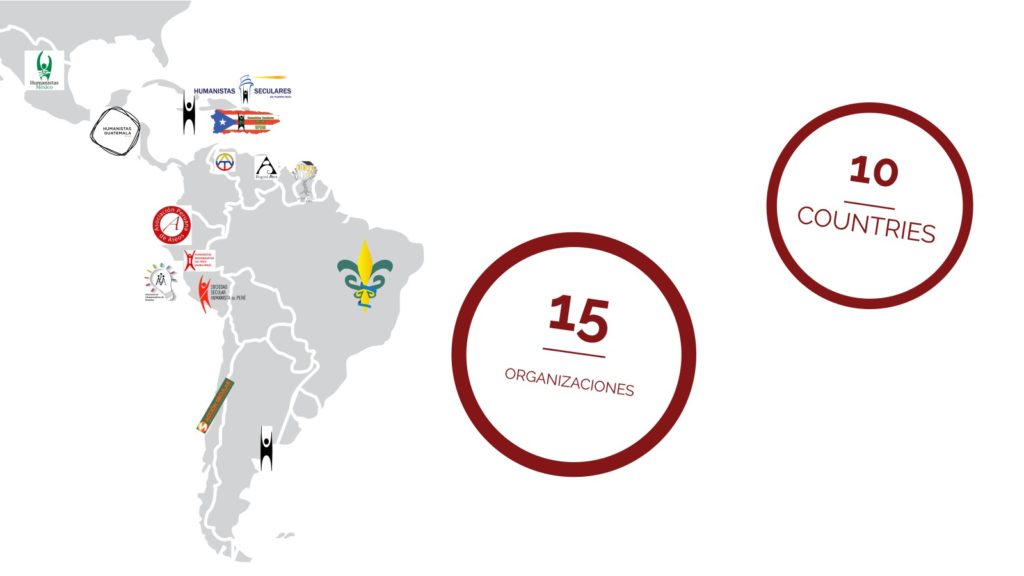 While in Colombia I learned a Spanish way of saying: “trabajar con las uñas” (literally, “working with the nails”, that is, to do the best with the few resources at your disposal). Our Member Organizations in Latin America are actually “trabajando con las uñas”, doing what they can on a daily basis, slowly achieving great results, despite the ongoing pushback of fundamentalism, superstition, and discrimination against non-believers.