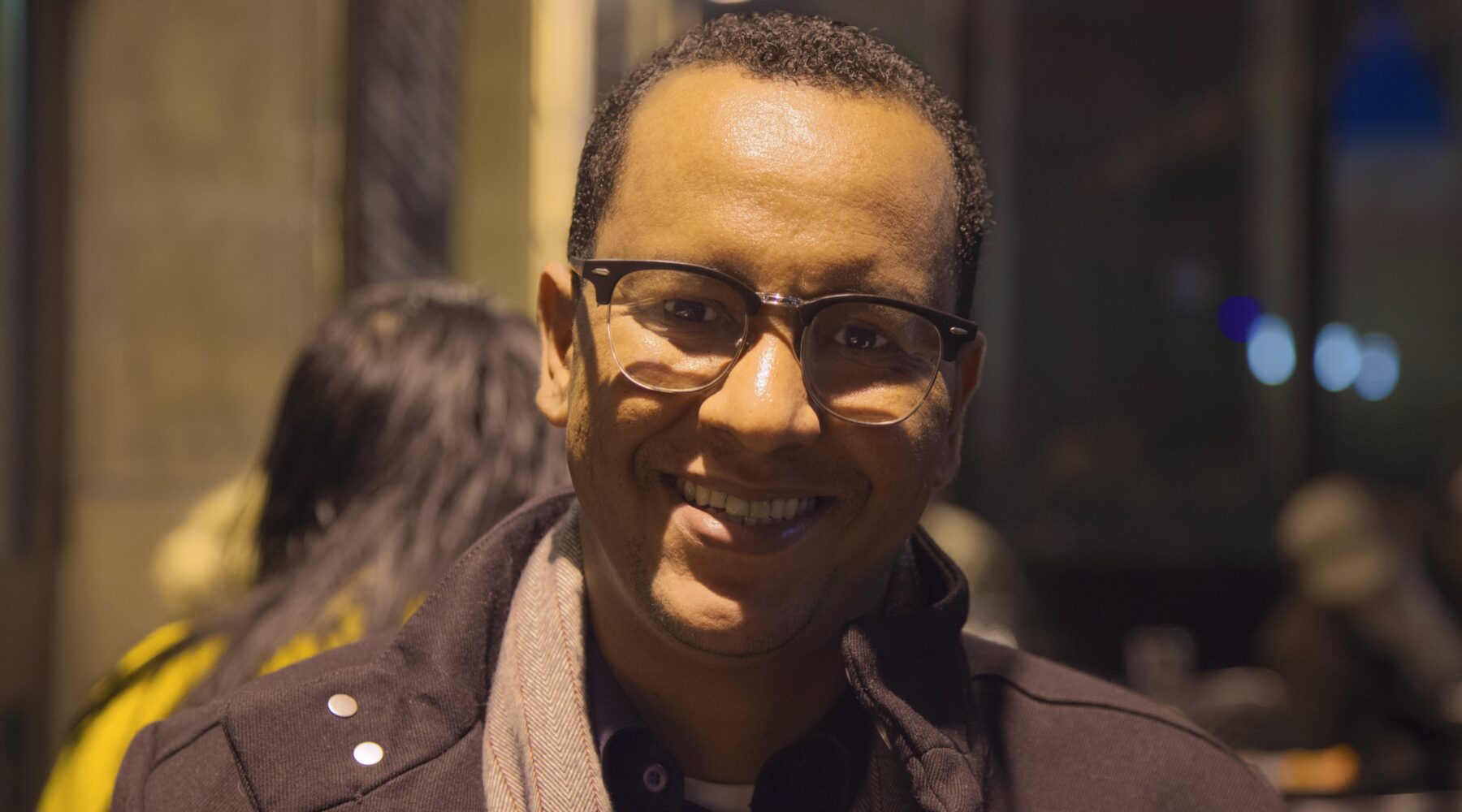 In this blog story, our Director of Advocacy Elizabeth O’Casey talks about the day she met Cheick Ould Mohammed Mkhaitir, a few days after he was freed from a Mauritanian jail where he spent almost six years on blasphemy and apostasy charges

Just over a year and one month ago today, on the 5th August 2019, I took an early train from my home in Brussels to the Gare du Nord in Paris. It was a bright summer day; I was full of anticipation.

I was going to meet a man who myself and my colleagues at Humanists International had been advocating on behalf of for over five years. A man who had, only a week previously, been released from the hell of isolated detention in a Mauritanian jail.

To recap: five and a half years previously, on 29th December 2013, writer, blogger and defender of the rights of the Moulamines caste in Mauritania, Cheick Ould Mohammed Mkhaitir, published a critical piece on the caste system and slavery, linking both to interpretations of Islam. His article highlighted the deeply hierarchical structure of Mauritanian society based on traditions dating back to the times of Prophet Muhammad and critiqued the severe discrimination suffered by the lower social classes in the country.

Incidentally, it is estimated that between 155,000 and half a million Mauritanians live in conditions of slavery. According to the Global Slavery Index, Mauritania has the highest prevalence of slavery in the world. 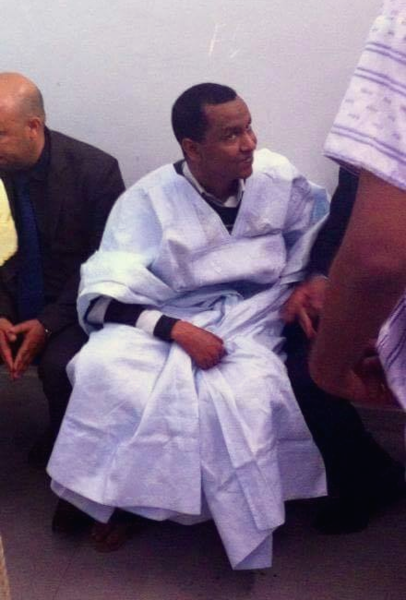 Cheick’s article caused national outcry and was weaponized by a group of Salafists – who went on to become the Ahbab Al Rasou organisation – in order to gain popularity and influence in the country. Ahbab Al Rasou self-describes as “ISIS Mauritania”. They called for his death. A Mauritanian entrepreneur had said he would pay just under $14,000 to whoever killed Cheick. A preacher, Abi Ould Ali, offered €4,000 to anyone who killed him.

In December 2014, Cheick was sentenced to death for “apostasy”, despite the fact that it was nearly impossible to get a lawyer to represent him, this sentence was later to be successfully appealed and changed to a sentence of two years in prison with a fine. Despite serving his sentence of two years, he was arbitrarily detained for a further three and a half.

Over the years there had been much work done behind the scenes and publicly by a select few NGOs and human rights advocates. I actually got the opportunity to go to Mauritania in April 2018 – when the African Commission for Human and Peoples‘ Rights (ACHPR) held a session there – and meet with one of Cheick’s lawyers. 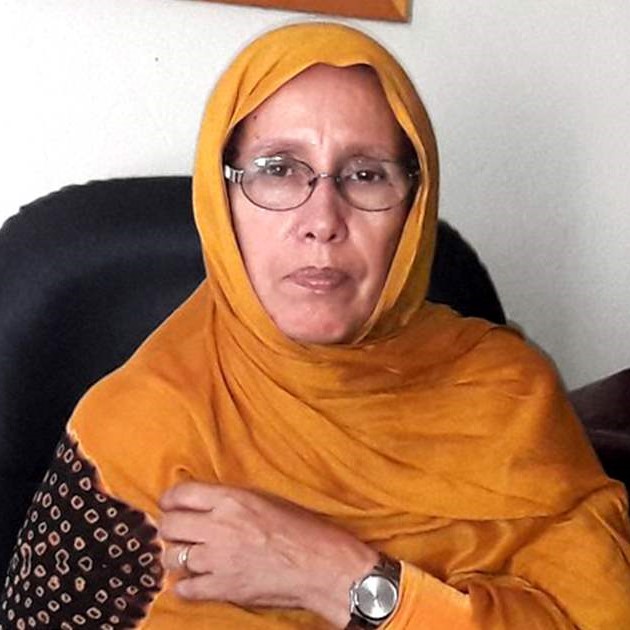 Amintou Mint El-Mocta, President of the Association of Women Heads of Households in Mauritania

Amongst the tumbling bougainvillea of one of the few restaurants I came across in Nouakchott, I also was lucky enough to meet the amazing Amintou Mint El-Moctar, who is a human rights defender and President of the Association of Women Heads of Households in Mauritania. Because she called for a fair trial and access to a lawyer for Cheick, she was labelled an atheist by the extremists. The head of Ahbab Al Rasou issued a fatwa against her: “Any human rights organisation that asks for his release, the people in charge of it are apostates and infidels. Amintou Mint El-Moctar is wanted. Let whoever finds her, kill her and poke her eyes out.” Incidentally, Amintou was not allowed to attend the ACHPR – Mauritania refused to let any local activists attend. I still treasure a very lovely bracelet she gave me, it reminds me of my privilege and her courage.

In the end, thanks to pressure from civil society and work by a few very assiduous UN Special Rapporteurs and the OHCHR, Cheick was released. It took too long though. Those were six years of hell and psychological torture for an innocent man, who was merely trying to defend the rights of a minority caste subjected to systemic discrimination. (Humanists International was at first branded as a Zionist organisation by the Mauritanian authorities since we were a minority voice and they sought to discredit us)

And so it came that one day at the end of July last year, Cheick was woken by guards in the dead of night, to be told only that he should accompany them. He had absolutely no idea what was happening, and I can’t imagine the confusion and terror he suffered in that moment.  He was smuggled out of the prison, taken by convoy across the border and then made it to France to seek asylum. It was a few days after his arrival in Paris that I met him.

I wasn’t sure how helpful I could be, I just figured he might want to see a friendly face. And since it was early August, very few other human rights advocates were working (they had joined the mass exodus for the holidays out of Paris). Together Cheick and I went to meet the woman in charge of processing the beginnings of his asylum application, who was very helpful and competent. The asylum system also ensured Cheick saw a doctor immediately and his poor sight – caused by years of darkness – was attended to. 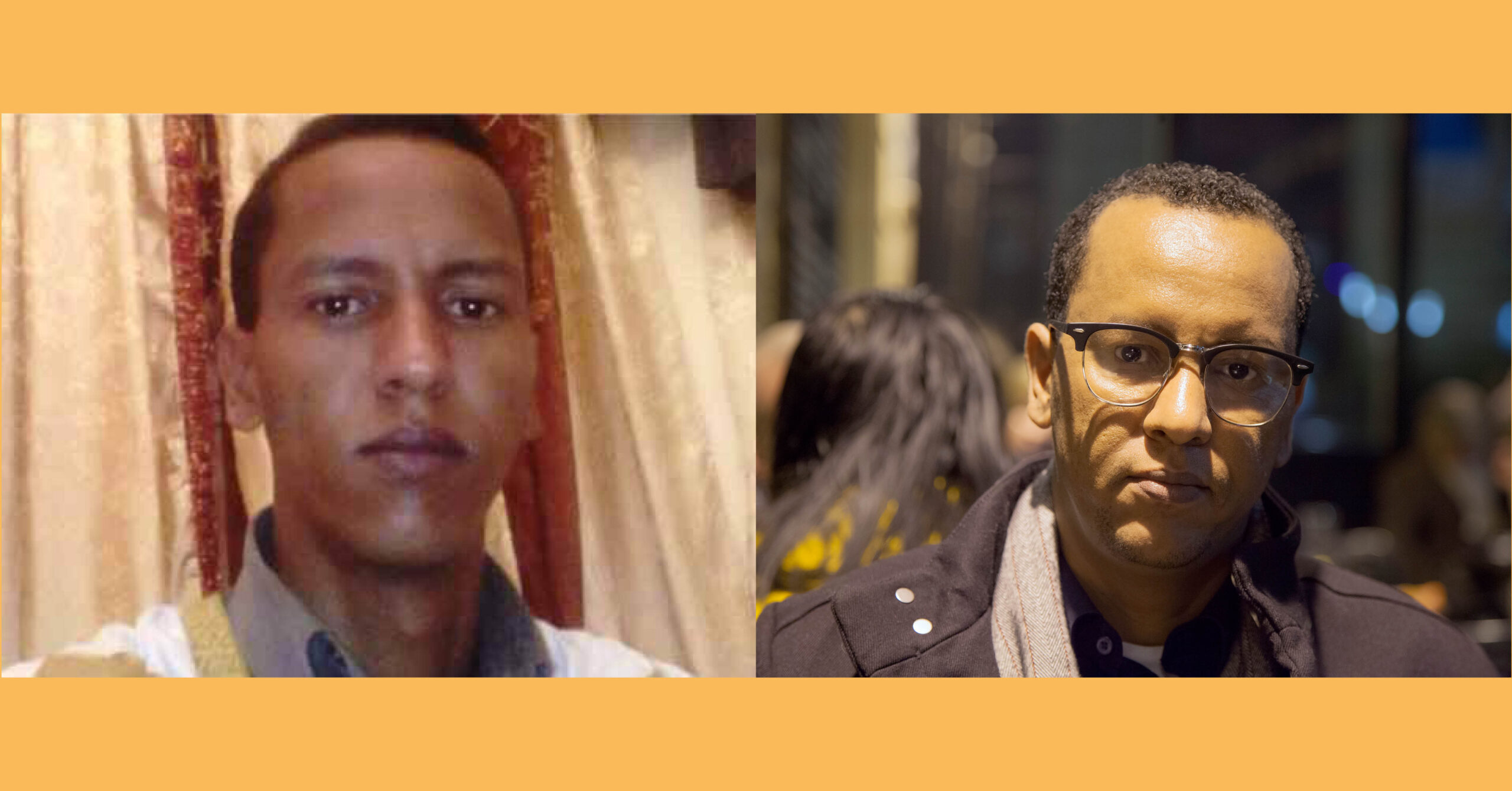 Cheick before and after almost six isolated years in prison

However, Cheick was terrified of coming into contact with other Mauritanian asylum seekers who would recognise him and potentially cause him harm. He didn’t even stay in the asylum centre, because as soon as he walked in the first time, he saw Mauritanians. Given the publicity and hate whipped up around his case in Mauritania, his fear was well-founded. Meanwhile he had also just seen that a popular Syrian preacher on YouTube was calling for anyone who met him to kill him.

This proved to be an issue of contention within the asylum process: they didn’t seem to have any mechanism to ensure that people accused of apostasy or blasphemy, or of being infidels (or indeed of identifying as LGBTI+) weren’t housed with religious conservatives or extremists. Cheick just kept asking if he could be housed with Christians or people from Sub-Saharan Africa, but this wasn’t something they would factor into his housing allocation. It is an issue I would urge our European Members and Associates to highlight where possible with their respective governments.

Cheick: A man of courage and integrity

As we sat and ate lunch in a quiet brasserie near where the asylum centre was in the outskirts of Paris (I still remember the taste of the meal I had – a thick burger cooked rare, with a glazed brioche bun – and my anxiety over what he might be able to eat), we talked a little about what had brought Cheick to the situation he was in. He told me of his liberal education and how he had been gradually publishing increasingly honest and critical pieces about Mauritania, religion and slavery. He actually drily joked at one point that maybe he went a bit too far in roping in Mohammed to his arguments since people can be a bit sensitive about him… I was so struck by Cheick’s values and his mind; how eloquently he critiqued the misogyny and the culture of traditional Mauritania, how much he cherished knowledge and reason. He was genuinely very sad that he wasn’t able to bring any of the many books he had amassed in prison with him when he was smuggled out. He described with horror the practice of men marrying young girls in Mauritania. He said how strong the women in his family are – his sister and mother stood by him; whilst his male relatives abandoned him after he had been arrested.

I was so humbled by this man. We promised to meet again – along with Kacem El Ghazzali – and drink lots of wine and talk more… Since he has yet to be granted the right to travel and since COVID-19 hit, this reunion has yet to happen. But I hope he will come to Geneva with us as soon as it is possible for him to do so. 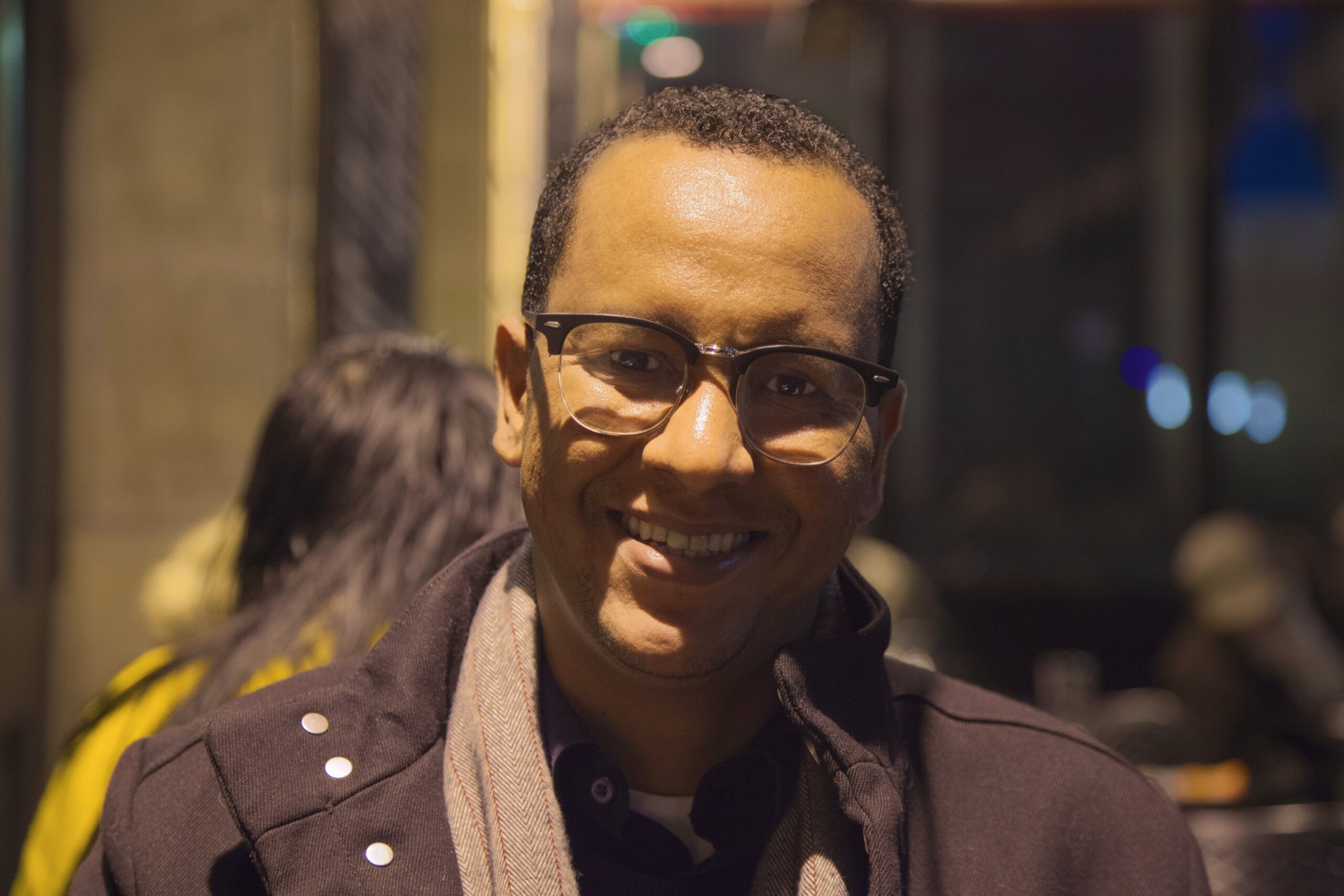 A year on, and Cheick at least has a place in Europe and I am grateful to France for that. But he has had to leave his home, his family and friends. He has had to suffer torture, psychological isolation, and a fear that should never be known. There are so many others like him; human rights defenders, despite the great dangers to themselves, trying to exercise their human rights to free expression, freedom of association and assembly in order to highlight and improve the plight of others. The courage and integrity of these people is inspiring, rare and something to be treasured and protected. It is the best of humanity. We must match it by being there to fight for them when they need it.