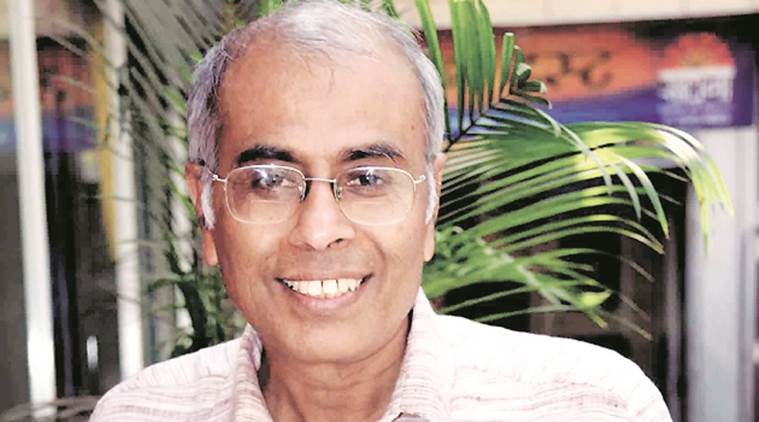 by Narendra Nayak, President of the Federation of Indian Rationalist Association (FIRA)

It was the late activist, rationalist, writer and founder of the Federation of Indian Rationalist Associations Basava Premanand who told me about Narendra Dhabholkar. Premanand was saying how a doctor gave up his career to devote himself to the rationalist movement. He was the leading light of the Maharashtra Andh Shraddha Nirmulan Samithi – an organization devoted to debunking superstition – and he firmly believed that one should lead from the front.

My friend Dr. Narendra Dhabolkar was a very soft-spoken, kind-hearted person. His amicable personality and pleasant manners hid his steely determination and his meticulous attention to detail. His powers of persuasion were legendary. Every time I met him he would be busy meeting some minister or member of the legislative assembly or some other influential public figure with one single objective – to get his brainchild, the so-called Anti-Superstition Bill, made into law.

While Narendra was a rationalist himself, he would tell people that it is alright if you want to worship Ganapathi (the famous elephant god whose festival comes up once a year and is celebrated with much fanfare in his home state Maharashtra) but make sure that the celebration of Ganapathi does not cause littering. He would say “celebrate Diwali (the Indian Hindu festival of lights), but do not waste money on fireworks. Donate it to a good cause.”

Narendra was a social reformer who joined the rationalist movement to use it as a tool for social reform. He was an atheist working for social reform when he met Premanand on his tours and thought that FIRA’s way of campaigning is a good way to reach the people. Busily immersed in his activities he gave up his medical practice to devote all his time to the eradication of superstitions, publications, travels and organizing activities.

He used a number of techniques to convey the message of rational thinking to the public – mainly targeting younger people. I remember him driving around the state of Maharashtra in a bus all year round setting up exhibitions outside schools where the communicators would interact with the children to promote scientific skepticism using models, demonstrations and videos. I can recall how extremely enthusiastic Narendra was about this program. He could tell you exactly where it would be on any particular day of any month, a year in advance! While at Narendra’s office, some of the senior members of his organization had called me aside and asked me whether I had any objections if he were to be sent to work at the national level alongside me to achieve our movement’s goal of developing scientific temper and humanism in India. “Objections?” I retorted, “I would be very, very happy because that would be of great help!” For decades I was the one who would travel the length and breadth of the country conducting workshops and lectures all over. Anyone coming to join would be great, especially a knowledgeable person and a meticulous planner like him.

Narendra with all his patience and persuasion managed to get the Anti-Superstition Bill passed in the legislative assembly in December 2006. It was the first one of its kind in India making many practices of black magic, exorcism and a number of superstitious exploitative practices criminal offences. However, the bill was blocked in the legislative council – the second house of the legislature – by those who thought it would affect their superstitious exploitation of others. The Maharashtra Anti-Superstition and Black Magic Act only passed into law after Narendra’s death; six days after Narendra’s murder, in fact, and came into force the following December.

The bill was probably the last straw for those who wanted to get rid of us. It was not that Narendra was alone on the hit list. The rightist reactionary forces have always been against us. In fact, Narendra had been offered police protection, which he had refused. He had invited me to the city 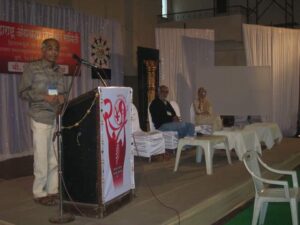 Narendra Dhabholkar speaking at a conference in 2011 with Narendra Nayak in the background.

Pune to speak at the 20th Anniversary of his organization in 2009. When I landed at Pune Airport he was waiting at the bus stop to meet me and I asked him why he was there in a public space without any protection. At that time I was not under threat and was traveling freely all over and all alone. He gave his classic reply – “If I agree to police protection they will kill some other member of our organization. It is better I be the victim than someone else!” These words were to be prophetic. Narendra was an ambitious man. When I asked him how he felt about working with me at the national level, he replied that he would join me after he successfully had established a branch of his organization in every single village in western Maharashtra. But he said he wanted to do one other thing for which he said I would have to help him. He said he had successfully organized conferences up to the national level and he wanted to organize an international one and wanted my ideas. But, that was never to happen in his lifetime. We did manage to arrange an international conference on the topic Rationality for Humanity in 2019, six years after Narendra passed away.

In the month of August 2013 I was conducting an advanced workshop on the development of scientific temper in Bengaluru. On 20 August, in the middle of the workshop, Dr. Sudesh Ghoderao, a member of Narendra’s organization and a participant of the workshop informed me of the tragic news that Narendra had been shot and it was very serious. An hour or so later, we got the message that he was no more.

On the very next day, we gathered to discuss how we could protest the murder and continue his legacy. During that meeting, Gauri Lankesh – known for her advocacy of freedom of press and a critic of the caste system – and I put forward a proposal that our home state of Karnataka too should have a law like the one passed in Maharashtra thanks to Narendra. Little did we know that our proposal would have a bearing on our lives too.

This proposal was picked up by two of the top law institutes in the state. Within months drafts were ready and presented to the government. The meetings on the final drafts were presided over by Dr. M.M. Kalburgi. In the meanwhile, on 20 February 2015, Govind Pansare, an activist encouraging inter-caste marriages, was shot in front of his residence. Though he was a representative of the Communist Party and the trade union movement to a larger extent than a representative of our movement, he was, like Narendra, a thorn in the flesh for the Hindu right-wingers. This was followed by the murder of M.M. Kalburgi in August. M.M. Kalburgi had presided over the release of the final draft of the proposed Karnataka Anti-Black Magic Act. There was a meeting arranged for a number of progressive organizations that wanted to lobby the government into passing the proposed legislation. In that meeting I was asked to speak to the ministers of the Karnataka government. I asked them as to when such legislation would be passed. I said “Narendra’s murder prompted our ask for an Anti-Superstition law and Kalburgi, who presided over the final draft, has also been murded. ‘How many more of us would you like to be killed before you pass it?”, I asked. The ministers seemed very upset and both of them made some reconciliatory noises!

In March, 2017 someone attempted to attack me but I escaped; I had been provided with a police bodyguard since June 2016 I had gone out without him early in the morning thinking that nothing would happen and I had a providential escape. The guards were increased from then onwards. This was publicized in the media and I remember Gauri Lankesh calling me and telling me to take care. When I asked her about herself she replied that such things would not happen to her. But within a few months she was proved wrong. On 5 September 2017 she was gunned down. The Anti-Black Magic Act based on the proposal Gauri Lankesh and I pushed, was passed in the legislative assembly in Karnataka two months after her death.

The murder of Gauri Lankesh caused an uproar in Karnataka. The state government set up a task force to investigate the crime. The results were surprising. A Hindu extremist organization had set up a sort of gang of killers to eliminate those whom they thought were their enemies. Besides those whom they had already eliminated they also had a hit list with around 20 people on it – many of them engaged in the fight against superstition. Girish Karnad, an eminent playwright and author, was on that list. He had led FIRA’s delegation to the office of the Chief Minister of Karnataka to request him to pass the Anti-Black Magic Bill into law. There was professor K. S. Bhagawan who used to speak against superstitions. Head of a Hindu monastery, Veerbhadra Chennamalla Swamy, who had organized meetings to force the government into enacting the law, was also on the list. My name was on there too. The dates for eliminating us were also fixed along with the hitmen assigned to each. We were all placed under police protection. The effect of these attacks has been one of fear, not just among those listed, but also among human rights activists and progressive thinkers.

The COVID-19 pandemic has shown the necessity of an Anti-Superstition Bill in all Indian states as we see an increase in placebo dispensers, concoctions of various types being sold and, vendors of quack remedies crawling out of the woodwork. Narendra Dhabholkar, Gauri Lankesh, Govind Pansare and M.M. Kalburgi are just a few individuals who have been killed for promoting rationalism, anti-superstition, fighting the caste system and defending human rights, and their voices have been missed in 2020. The rationalist movement is still working hard to honour them, and we continue to fight for anti-superstition legislation in all states across this sub-continent.

Today marks the 7th anniversary of my friend Narendra Dhabholkar’s murder. The hostile right-wing reactionaries are still a constant in our lives. However, Narendra Dhabolkars’s murder was not in vain. The movement has been rejuvenated, younger people are joining in, and thankfully, a number of charlatans have been prosecuted under the Anti-Superstition Black- Magic Act in Maharashtra.