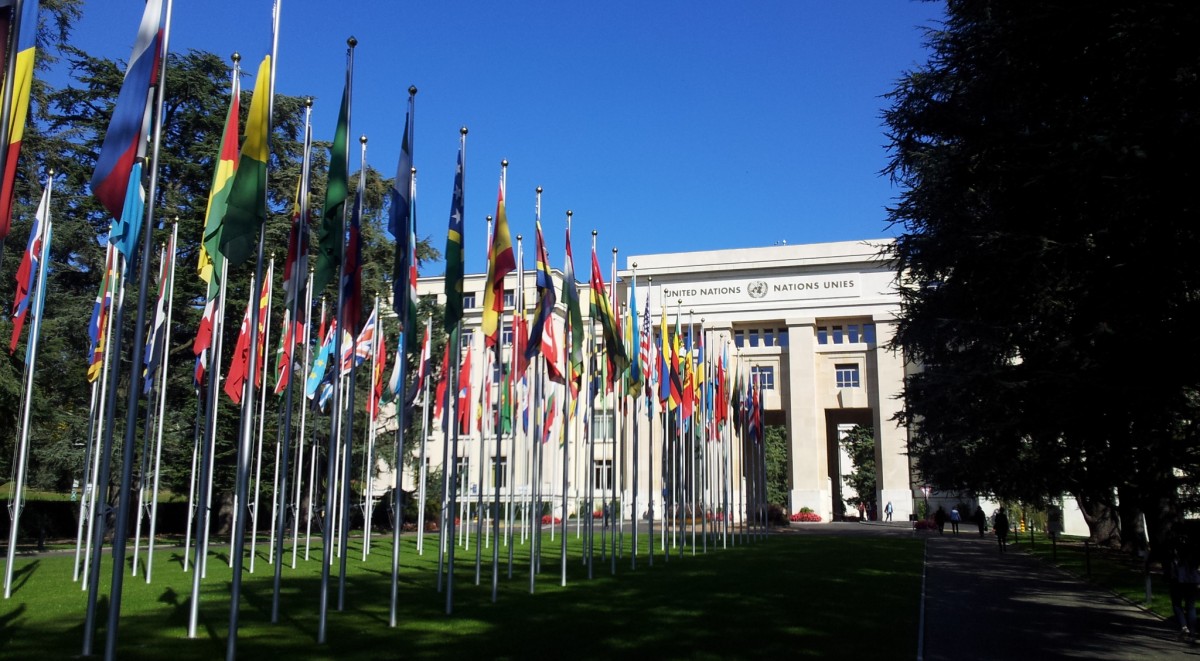 “Tense Times”: Freedom of Expression and Religion or Belief at the UN

At the close of the 31st session of the UN Human Rights Council, IHEU director of advocacy, Elizabeth O’Casey, reflects on the relationship between the rights to expression and religion or belief and looks at the undercurrent of tension deriving from the divergent views within the Council on the role and nature of these rights.

This session for us (as many have been) was largely defined by the intersection of the right to freedom of expression and the right to freedom of religion or belief. These are of course, ‘neighbourly rights’, not only in the figurative sense, but literally too – expressed through articles 18 and 19 in the UDHR and ICCPR. Heiner Bielefeldt, the UN Special Rapporteur on Freedom of Religion or Belief dedicated the final report of his mandate (PDF) to this very issue, and in it he expanded upon the mutually reinforcing nature of the two rights.

Ceiling of Plenary at the UN Human Rights Council

To us at the IHEU, this complementary relationship seems obvious and reflects much of what we argue in our contributions and statements at the Council. The right to manifest one’s religious beliefs or other convictions will be enacted through a form of expression; and crucially, for those without religious beliefs their secular worldview will often be expressed by questioning religious tenets. Without the right to free expression, the right to belief seems a nonsense. As Bielefeldt himself has noted, freedom of religion or belief and freedom of expression “epitomize the principle of equality which underpins the human-rights approach as a whole” and “play an indispensable role in shaping free and democratic societies, in which the diversity of, inter alia, thoughts, ideas, opinions, interests, convictions, conscientious positions, religions and beliefs can be manifested and defended freely […]”

But whilst we and many others who are genuinely dedicated to both rights recognise their neighbourliness as friendly and complementary, for some in the Council – and indeed across the world – neighbourly means bitterness, conflict and contradiction.

As we have stated many times before, this concept of “defamation of religion” is fundamentally inconsistent with the universal principles underpinning human rights, which affirm the protection of the rights of individuals, rather than beliefs. For, whilst traditional defamation laws punish false statements of fact that harm individual persons, by contrast the notion of defamation of religion seeks to punish the criticism of ideas. Moreover, existing international legal instruments already address discrimination, personal defamation, and incitement in ways that are more carefully focused to confront those specific problems without unduly threatening the rights of freedom of expression and the freedom of thought, conscience and religion.

Not only is the concept of defamation of religion completely contrary to the human rights framework, there is a significant history of the Council pursuing this line of thinking. In 2002, the UN Commission on Human Rights (UNCHR) adopted a resolution, drafted by the Organisation of Islamic Cooperation (OIC), entitled “Combating Defamation of Religions.” When the IHEU started its campaign against this resolution in 2004, two thirds of UN delegations supported it. Over eight years, the resolution, in a variety of versions, was adopted by the UNCHR and the UN Human Rights Council. Similar resolutions were adopted by the UN General Assembly in 2005, 2007 and 2008. However, the IHEU, along with other civil society representatives and state missions were gradually able to erode that two thirds majority. In 2011, the UK, Pakistan, USA and Turkey got together to sponsor a new resolution that sought to achieve a consensus from all, in exchange for the abandonment of the defamation resolution. This resolution, “Combating intolerance, negative stereotyping and stigmatization of, and discrimination, incitement to violence and violence against, persons based on religion or belief” (but for obvious reasons of brevity, referred to as “Resolution 16/18”), replaced calls to combat the deeply problematic concept of “defamation of religions” with commitments to address religious intolerance through promoting the related rights to freedom of expression, freedom of religion or belief, and non-discrimination.

Resolution 16/18 was passed by consensus, and has been passed by consensus every year since. Nevertheless, each year there is much diplomatic wrangling over it, with particular reference to a parallel EU-sponsored resolution on Freedom of Religion or Belief. This year there were suggestions that the 16/18 resolution might include a call for an Advisory Committee or Special Rapporteur on intolerance. To stop that happening, the EU offered to drop its “welcoming” of Bielefeldt’s report instead merely “noting” it in its Freedom of Religion or Belief resolution (not a big compromise, but a shame given the quality and importance of Bielefeldt’s report).

The concern for those against a re-introduction of defamation language into the UN resolutions however is that resolution 16/18 is not the only context in which amendments pushing anti-defamation principles might be targeted. For example, last June the USA sponsored a resolution on freedom of artistic expression and during the informal meetings on it Saudi Arabia suggested that the resolution should mention ‘defamation of religion’. The difficult thing about this resolution was that it came relatively soon after the Charlie Hebdo attacks in Paris; and whilst many would be extremely sympathetic to the need for the Human Rights Council to reinforce the right to freedom of artistic expression in that context, countries like Saudi Arabia had on their mind the issue of insult, offence and defamation post-Charlie Hebdo. In the end the USA had to withdraw its resolution so as not to risk having it voted down or amended. At this session, during informal discussions on a resolution on terrorism and human rights, sponsored by Egypt, acts of “blasphemy” and defamation were framed as forms of extremism and portrayed as threats to security.

What is deeply concerning for us is that there is no longer the institutional memory at the Council to understand and resist this pressure against free expression. With the replacement of diplomats and NGO representatives, fewer people around the Council remember the anti-defamation resolutions, their origin in the concept of “blasphemy”, nor the arguments around how deeply problematic they are. It is within this context that we worry that the OIC will slip in a line on defamation in one of the resolutions, almost covertly, and without the institutional memory that “defamation of religion” is essentially just “blasphemy” law by another name, I am not convinced that the un-merry dance to keep even the imperfect status quo can continue to deflect the OIC’s cyclic tactics.

Anti-“blasphemy” laws are deeply pernicious and they fail to protect even the right to freedom of religion or belief since they render all meaningful dialogue between religions, religious people and non-religious people, potentially liable to some arbitrary charge. Far from ensuring a harmonious community, such laws are anti-cohesive; they actively discourage a much-needed improvement in the understanding there is between groups of people with differing beliefs and religions.

There needs to be a renewed push for implementation of resolution 16/18, with a focus on its action plan and the seminal Rabat Plan of Action on Prohibition of Incitement. Further, we need a renewed defence of the right to free expression entailing the right to insult or be offensive. It seems unfashionably negative, and perhaps vulgar to say it so bluntly, but it is upon this implicit point that there is so much disagreement. Tip-toeing around the subject, as is done too often at the Council, doesn’t help clarify matters and it doesn’t help states push the agenda forward to better standards.

Crucially though, this implicit right to offend needs to be applied impartially, which was regrettably very much not the case in a post-Charlie Hebdo France; where those with deeply unpleasant and extreme views were silenced and criminalised. This only acts to give some credit to the invidious and cynical refrains about the “double standards” of the West on human rights coming from the OIC and its allies at the Council. The ‘double standards’ jeer is a well-worn and lazy argument used at the UN to excuse those who seek to relativize human rights and an agenda of exceptionalism; but an unjust inconsistency in protecting the right to free expression by Western states does nothing to help dilute those arguments of any merit.

As suggested by resolution 16/18 free expression needs to be coupled with policies and laws that tackle the root causes of discrimination; a partial application of human rights standards runs in diametric opposition to this and risks leaving behind those citizens who still need to be reassured of the role of free expression in promoting freedom of religion or belief and as an antidote to intolerance. 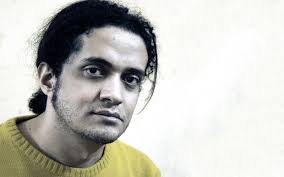 Ashraf Fayadh, sentenced to die for “apostasy” after being accused of “promoting atheism” in his poetry

Of course intolerance can be targeted with equal force against those with no religion; in a remarkable statement at the Council, Saudi Arabia suggested that any right to free expression does “not allow for insulting the divine or denying the existence of the creator.” Such sentiments are taken seriously at home, where people are sentenced to death by beheading for allegedly denying the existence of God. One such example is that of poet Ashraf Fayadh. Fayadh’s father is said to have died of heartbreak after hearing his son had been sentenced to death by beheading. In his first poem, published since he was imprisoned for “promoting atheism” through his poetry – ‘Tense Times’ –  Fayadh explores grief and imprisonment.

I find arguments of reason, law and fact so often pale in comparison to that which art and beauty can convey. Accordingly I urge you to read his poem in full; and I will stop my musings here, where Fayadh’s begin…

“Tense times for me, us
and sleep’s acting like a newly love-struck teen.
I shall disregard the state my heart’s in
and my mind’s upheavals like water bubbling
past the boiling point …”