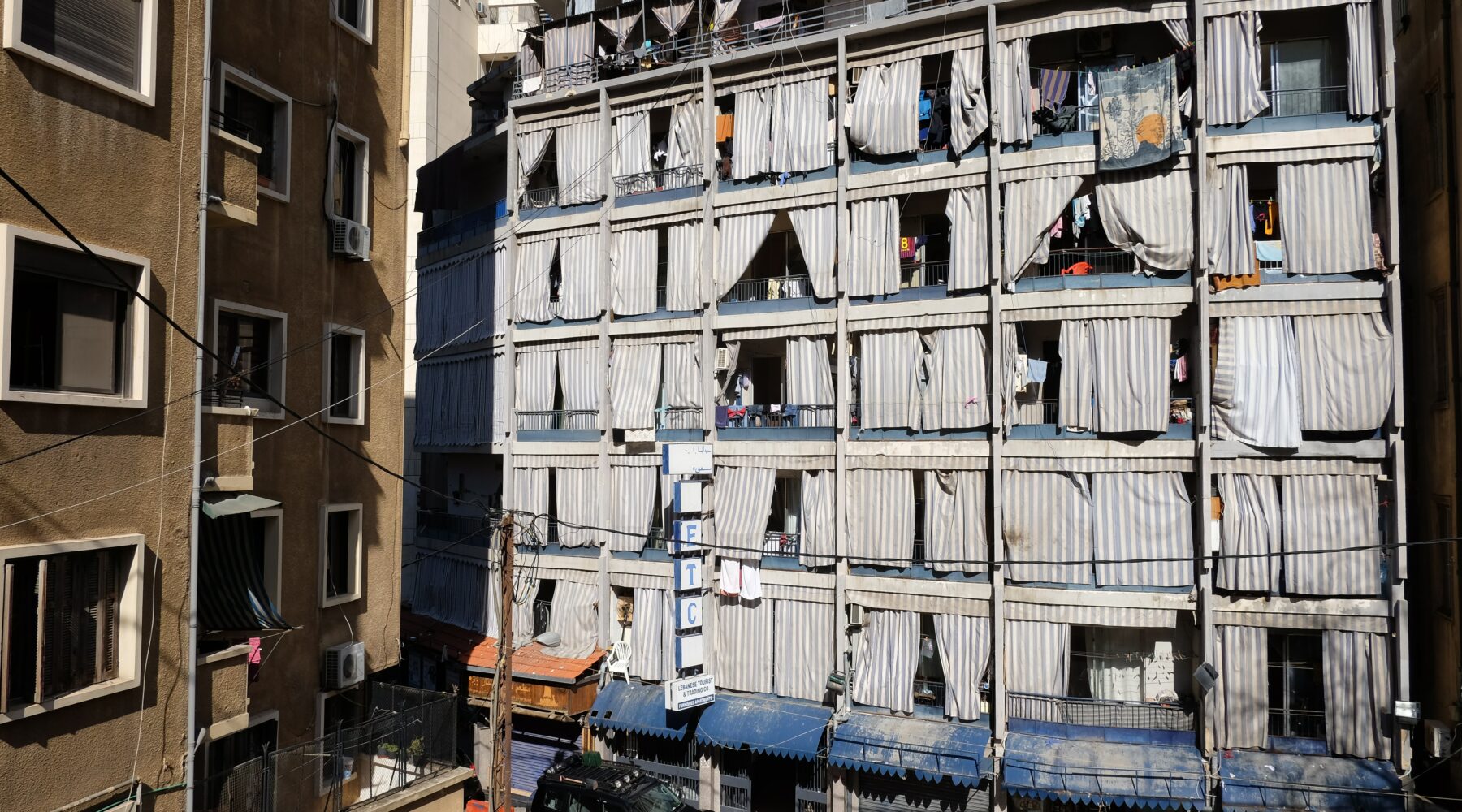 On 8 July 2021, member states of the UN Human Rights Council met to discuss Lebanon’s human rights record, as part of its Universal Periodic Review[1]. Representatives of Freethought Lebanon were watching. Here, they blog about their reflections on the debate and on what Lebanon said at the session.

This blog represents the views of Freethought Lebanon, an Associate of Humanists International.

The session began with a brief presentation by the representative of the Lebanese Republic to the United Nations, Ambassador H.E. Mr. Salim Baddoura, in which he presented a rosy picture of how our government is passionately dedicated to promoting and defending human rights. This could not be a further misrepresentation of the truth.

Extreme violence against protestors and abuses of freedom of assembly

In his speech, Ambassador Baddoura reiterated some clichés about how the Constitution protects freedom of thought, freedom of speech, and the right of peaceful protest. In reality, Lebanon is gradually turning into a police state. For example, disproportional and extreme use of violence against protestors was well documented in the aftermath of the popular uprising in October 2019. There were systemic actions by some security forces to shoot rubber bullets directly at the eyes of protestors, with the intention to blind some protestors as a means of intimidating them. 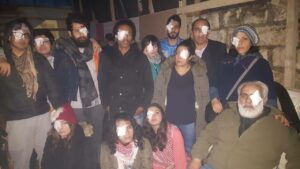 In addition to the excessive use of force against protestors, there have been multiple documented cases of security personnel beating up protestors after they were arrested and detained in the custody of the police.

One other tactic the Lebanese state in increasingly using to oppress and subdue the protestors is the prosecution of civilians in military courts, which are infamous for their unfair and harsh rulings.

Ambassador Baddoura stated that Lebanon prides itself in preserving free speech and in even encouraging the creative expression of the arts. In reality, the State officially has a censorship bureau that reviews all books, films, music albums, and plays before they are allowed to be published. One theatre director once presented a script to the bureau about a play that discusses this act of State censorship and ironically the bureau decided to censor his play. Multiple art works are censored every year, and many books are censored too.

In one infamous case, religious zealots wanted to stop a concert by a popular Lebanese band (Mashrou Leila) whose lead singer is openly gay. The religious zealots, backed by the Catholic church in Lebanon, claimed that band’s songs were ‘satanic’. These ludicrous claims could not have been officially adopted by the Lebanese State without embarrassment, so instead the State opted to use another method to ban the concert. The State informed the organizers that it would be unable to provide security protection for the concert, and so the organizers had to cancel the concert themselves, given the vicious and violent threats of the religious zealots. These tactics are often used by police. For example, during Pride week, the police informed LGBTQI+ activists (and the venues that they were renting) that they would be unable to protect them, thus forcing organizers to cancel most activities.

The Lebanese State is also infamous for its ‘bureau of cybersecurity crimes’ which systemically investigates and harasses activists for what they choose to post on their personal social media pages. In one case, a judge forced a citizen to shut down his Facebook account because he made a joke about a religious figure.

All these examples show that in no way does Lebanon protect free speech or foster artistic expression.

Ambassador Baddoura’s speech included many of the usual human rights buzz words usually used to give the appearance of progressive change. However, it is equally important to note what the speech intentionally left out. There was no mention, for example, of either civil marriage or LGBTQI+ rights.

To this day, the Lebanese state has failed to legalize a Lebanese personal status law. Instead, only sectarian personal status laws exist in Lebanon, with the majority of these laws being severely discriminatory against women and children. Despite decades of calls to legalize civil marriage, secular or interreligious couples who wish to obtain a civil marriage are still forced to travel abroad to do so.

Furthermore, article 534 of the penal code, which punishes ‘acts of sex against nature’ is still used to criminalize homosexuality and prosecute LGBTQI+ people in the country.

Neglected reform to the Kafala system

Regarding the Kafala system that causes so much harm to tens of thousands of domestic workers each year, Ambassador Baddoura said that “while it is an important issue, Lebanon doesn’t have the resources to commit to solving the issue before the next review in 5 years.” It is interesting to note that the solution to this problem is not in any way dependent on resources; it simply requires a political and administrative decision to replace the Kafala system, which is in many ways similar to modern day slavery. 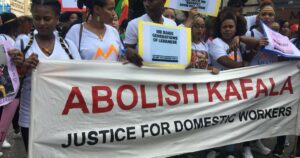 Prior to the current financial crisis, which has undoubtedly compounded the struggles of domestic workers, it was estimated that at least one domestic worker commits suicide in Lebanon every week because of inhumane working and living conditions. It is disappointing that Lebanon is not yet willing to address this injustice that it is causing.

Ambassador Baddoura claimed that “despite the unprecedented financial and economic crisis that the country is facing […] Lebanese authorities are still determined to meet all their human rights commitments and to cooperate with full transparency to further strengthen and alleviate human rights situation in the country.”

Ambassador Baddoura had the audacity to portray the financial crisis as if it were some misfortune of fate, whereas it was in fact directly caused by the ruling class that he’s represents. The Lebanese state has been squandering money for decades. That spending was largely lost to corruption and economic mismanagement, which has led the state to fall deeply into debt (well over a 100 billion$ now) with a large portion of that money borrowed from local banks. When the State eventually defaulted, the banks did not have the liquidity to give people back their money, and so the lifesavings of entire generations had virtually evaporated overnight. Consequently, the local currency dramatically collapsed in the aftermath, with its value now being less than 1/10th of what it was two years ago. The economy is now in freefall and most people no longer have access to basic goods needed for their survival: medicine, fuel, electricity, or even food.

These actions of the Lebanese ruling class are a ruthless crime against the Lebanese people, and what they have done should never be presented in a manner that veils their criminal responsibility.

In relation to the 2020 Beirut port explosion – a horrendous crime which left more than 200 people dead and tens of thousands injured and homeless – the Lebanese ambassador claimed that justice is well on its way and the judge presiding over the case has full independence and protection to carry on with his mission. This lie was particularly aggravating as I compare to what is actually going on with this case. We do not yet know the full truth of the explosion, but the facts are beginning to make particular scenarios more plausible than others. In the best case scenario for the State, the explosion was caused by criminal negligence by State officials. In the worst case scenario, ammonium nitrate was imported by powerful paramilitary militias and stored at the port, with State officials covering it up.

Responsibility of the disaster aside, the Lebanese ruling class have been effectively obstructing justice in this case. The first judge who attempted to press charges against two former ministers was removed from the case, and now parliament and the government are claiming that the accused have official immunity.

In general, there is also the problem of executive interference in the justice system.

One of the pillars of democratic rule is that the judiciary be independent from the legislative and the executive branches of the state. This is not the case in Lebanon, as the body which supervises all courts and judges, is appointed by the government. Not only that, but the signatures needed to appoint this board are set up in a way to ensure that all major religious sects approve of this appointment (Christian Maronite president, Sunni Prime Minister, Shiaa Minister of Finance).

As such, judges who defy the ruling class are often punished by being demoted or by being appointed to serve in courts which are significantly far from their area of residence. Like the Kafala system, the reform of ensuring judicial independence does not require any resources to be realized; it only requires political will.

Sectarianism: one of the root causes of this situation

One of the main reasons for this is that Lebanon is a post-civil-war country that did not undergo any meaningful reconciliation process, and so sectarian mistrust and division are tools that our ruling class continue to use to stay in power and avoid accountability. As the government is composed of representatives of different sects, each sectarian party claims legitimacy to their supporters through fearmongering propaganda (that the other sect is out to get us), and so we have little accountability. For example, if any particular public figure is found to be corrupt, it is difficult to prosecute him/her because their party will claim that this is an attack motivated by sectarian hatred, and so the case would soon be dismissed. Sectarianism paralyzes accountability.

Only secularism can remedy such division and corruption.

Overall, at Freethought Lebanon we were disappointed by the UPR process and result. Lebanon’s behaviour as a State is akin to that of a con artist: it seeks to give the impression of doing honest work while in fact it is deceptive. Ambassador Baddoura pointed to alleged achievements in human rights, which are nevertheless void of any meaning or impact. The ‘national human rights strategy’, the ‘national youth strategy’, and many other similar fancy-sounding titles are often nothing more than PDF documents prepared by consultants which are then flaunted by the State as if they were some grand achievement.

The interventions of most States were also underwhelming, with Arab states, rather tellingly, focusing on the importance of economic rights while avoiding any mention of civil and political rights.

We acknowledge that the burden of achieving change in Lebanon falls mostly on us, the Lebanese people, but it is rather disappointing when other international actors, particularly the UN, support an unjust regime in its efforts to whitewash its transgressions against its people.

Finally, we would like to extend my deepest thanks, on behalf of Freethought Lebanon, to our friends and colleagues at Humanist International, and particularly Ms Lillie Ashworth, for generously supporting our efforts to contribute to the UPR process and in making Freethought Lebanon’s original submission.

[1] The Universal Periodic Review (UPR) is a unique process which involves a review of the human rights records of all UN Member States once every 5 years.