Humanists International’s Advocacy Officer, Lillie Ashworth, blogs her reflections after the closing of the third Ministerial Conference to Advance Freedom of Religion or Belief

The conference took place online, over November 16-17, and brought together State representatives, representatives from multilateral organizations and members of civil society to discuss how best to promote the right of freedom of religion or belief (FoRB).

In its previous iterations, the event was hosted by the United States and referred to in typically exclusive language as the “Ministerial to Advance Religious Freedom“. While the title of this year’s event (now the “Ministerial to Advance Freedom of Religion or Belief“) is certainly an improvement, having watched the proceedings unfold, I am sceptical that this change in language signifies anything more than a superficial nod towards greater inclusivity. This came through not only in the contentious remarks made by States during the event, from the defense of blasphemy laws to the attempts at religious persecution one-upmanship, but also in the controversial choice of host.

In its conference briefing, the government of Poland noted,

“we need to be aware that actions that are being undertaken during the pandemic can endanger rights and are in some cases used to justify repressive changes to legislation, disinformation campaigns as well as to increase hate speech or stigmatization of minority groups.”

Poland’s attacks on democracy, women’s and LGBTI rights have all accelerated under the conditions of the pandemic. Not only is it currently attempting to effectively ban abortion in all but a small minority of cases, it has a blasphemy law in its penal code which it has used to arrest and detain activists. 3 LGBTI activists are currently facing 2 years in prison for the ‘crime’ of owning a poster of the Virgin Mary with a rainbow halo around her head.

All of this is hardly a secret, given the widely reported footage of enormous demonstrations taking place across several Polish cities in recent weeks. Yet, infuriatingly, the hypocrisy of the host country’s remarks were completely unremarked on by any of the conference attendees (with the exception of Hungary, who expressed its heartfelt solidarity….with the Polish government and with the Polish Catholic community).

During the conference, several States misrepresent the right of FoRB

The format of the session, which involved State representatives delivering short pre-prepared statements, meant that there was no opportunity to critique the remarks of other attendees. This was a great shame, given that several States expressed profoundly anti-human rights views that were allowed to stand unchallenged.

To their credit, Germany, Sweden and Denmark all condemned blasphemy and religious insult laws in their statements, but did so without naming the host country or any other States who continue to endorse such laws. In condemning “hate speech against Islam and its symbols”, Egypt gave implicit endorsement to the false notion that religions have a right to be free from criticism. In a similar vein, the representative of Iraq iterated his “refusal to accept all forms of insults, especially to the Prophet Mohammed.” 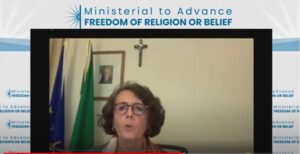 The Deputy Foreign Minister of Italy

Brazil and Hungary both told a selective story of Christian persecution. Hungary parroted the contentious claim that Christianity is “the most persecuted religion on earth” (also ignoring the fact that religions cannot be ‘persecuted’), and decried the rise of “anti-Christian movements” in Europe that have “humiliated” the monuments of John Paul II.

In another ironic moment, the Deputy Minister for Foreign Affairs of Italy, H.E. Marina Sereni, chose to deliver her comments on the importance of FoRB for all without removing a crucifix clearly visible behind her.

Another recurrent theme in comments by States included the impact of COVID-19 restrictions on the right of FoRB. In its intervention, the Holy See sought to carve out a Catholic exception to rules banning public gatherings, arguing that access to the sacraments constitutes an essential service. “We must not put the spiritual and moral dimension of the person as secondary to this earthly existence” the representative argued. As someone quite attached to my own earthly existence, this comment was somewhat alarming. However, I remind myself that international human rights law remains firmly on the side of public health: COVID-19-related restrictions on communal religious worship are fully compatible with the right of FoRB, so long as they are lawfully prescribed, absolutely necessary and non-discriminatory.

If you are interested in re-watching the event itself, a recording of the ministerial can be viewed here.