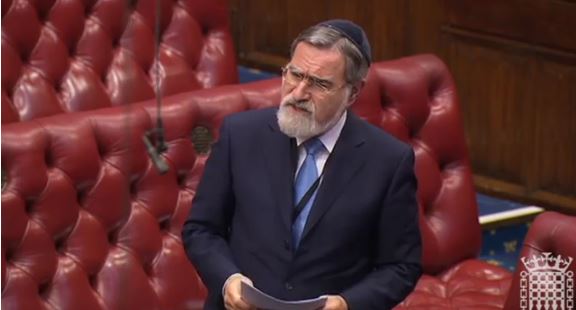 We’re not that terrifying – A response to “Atheism Has Failed”

In a recent article by the UK’s chief rabbi, Jonathan Sacks claims that “atheism has failed. Only religion can defeat the new barbarians”. Here atheist blogger Adam Lee replies.

In the latest issue of the Spectator, Jonathan Sacks, chief rabbi of the U.K.’s largest group of Orthodox Jewish synagogues, launches a broadside at the new atheists. He claims that if we succeed in diminishing religion, we are doing far greater damage to civilization itself:

[R]eligion has social, cultural and political consequences, and you cannot expect the foundations of western civilisation to crumble and leave the rest of the building intact. That is what the greatest of all atheists, Nietzsche, understood with terrifying clarity and what his latter-day successors fail to grasp at all.

Many critics of the new atheism, Sacks among them, complain that it isn’t radical enough. They assert that atheism ought to be a terrifying prospect, entailing the radical reshaping of human society and the destruction of every comforting and familiar beacon, and that we atheists are somehow breaking the rules by not advocating this. In short, they’re arguing that it’s unfair for atheists to be so normal!

However, the rabbi is hardly a dispassionate observer in this. What he’s implicitly claiming is that religion is essential to the human condition, that it’s so deeply interwoven with civilization that we can’t take it away without everything else collapsing. Needless to say, the new atheists don’t think religion is as essential as all that. It’s a central plank of our argument that the importance of religion is vastly overblown, that it’s not essential to human community or morality (much less “the foundations of western civilization”) as its defenders claim, and that we’re perfectly capable of being decent people and leading happy, fulfilling lives without it.

Sacks continues with his discourse on Nietzsche:

Time and again in his later writings he tells us that losing Christian faith will mean abandoning Christian morality.

For once, I’m in complete agreement with that. Of course this isn’t to say, as Sacks speciously claims, that giving up Christianity would mean abandoning the Golden Rule. That isn’t “Christian morality,” but a basic principle of empathy that’s found across a diverse spread of cultures (and how strange it is that a rabbi, of all people, should be eager to assign the copyright on morality to the Christians). The truly good moral principles don’t need religion to justify them: all it takes is reason and conscience. We don’t need a voice from on high to understand the benefits of reciprocity, or to grasp the reason why it’s better for everyone to establish stable and peaceful societies governed by the rule of law.

No, the only moral principles that can’t stand without a religious justification are the bad ones: slavery, absolute monarchy, the oppression of women, laws commanding the execution of dissenters and blasphemers, theocracies that treat religious minorities as second-class citizens, the racist mythology of a “chosen people” or a “promised land” deeded by a god to a particular subgroup of humanity, who are therefore entitled to evict all others by force. All these evils, and the horrors of history they’ve spawned, have no grounding in reason and can only be defended by claiming, “Thus sayeth the Lord.”

In contradiction to Sacks, the Holocaust can be counted among these. He absurdly claims that the Nazi horror arose from “Europe losing its Christian ethic,” but in fact that supreme atrocity had its roots in medieval Christian anti-Semitism, which itself sprang from the bitter struggles between Jews and early Christians that gave rise to the “Christ-killer” myth. The New Testament itself supports this blood libel when it has a Jewish crowd declare before Pilate that Jesus’ blood will be on them and on their children.

When religion fades away, unfounded prejudices like this will fade with it. The widespread adoption of atheism wouldn’t solve every conflict or make the world a utopia overnight, but it’s inarguable that it would remove some of the most stubborn and persistent reasons that people have for mistreating each other. Sacks continues:

Lose the Judeo-Christian sanctity of life and there will be nothing to contain the evil men do when given the chance and the provocation.

This is ironic, considering the number of crimes for which Sacks’ own scripture commands the death penalty. The long list of offenses punishable by execution in the Torah includes children who disobey their parents, people who do work on the Sabbath, men who have sex with men, married people who commit adultery, anyone who blasphemes, and rape victims who don’t scream loudly enough. Those who’ve read the Bible know that it hardly treats life as sacred! On the contrary, it depicts God as the greatest killer of all, slaughtering people by the thousands for even trifling offenses.

I feel confident that Sacks doesn’t advocate stoning or any of the Bible’s other harsh laws, which is precisely the point. The fact that most people no longer support the cruelties of scripture makes it plain that “the Judeo-Christian sanctity of life” is a recent invention indeed. It only arose after humanity’s moral sentiments had advanced enough to make us capable of thinking in such terms, after which religious justifications were invented for a fundamentally secular principle.

This is what always happens. The moral advance comes first, triumphing over ferocious religious opposition, and then when enough time has passed for memories to fade a little, religion is given the credit for it. This is what happened with the abolition of slavery, with the principles of secularism and democracy, with the granting of equal rights to women, and with the overthrow of racial segregation, and we see it playing out today with equal rights for gay and lesbian people (a debate in which I note that Sacks has been on the wrong side). The fading of “Judeo-Christian” morality, far from unleashing chaos, has made our society more compassionate and more just.

But if asked where we get our morality from, if not from science or religion, the new atheists start to stammer. They tend to argue that ethics is obvious, which it isn’t, or natural, which it manifestly isn’t either, and end up vaguely hinting that this isn’t their problem.

This is an obvious and lazy calumny. The new atheists have written extensively about morality, in books like Sam Harris’ The Moral Landscape or Richard Carrier’s Sense and Goodness Without God. Other atheists would point to the work of freethinking philosophers both ancient and modern who’ve written voluminously about ethics, from Jeremy Bentham to John Stuart Mill to Peter Singer. Many modern atheists would even state their essential agreement with the principles of Epicurus, whom Sacks cites himself!

The truth is that atheists have given careful thought to questions of morality. Whether or not you agree with secular ethical philosophies, it’s not honest to try to sweep them under the carpet and pretend that they don’t exist.

To wind up his argument, Sacks concludes:

In one respect the new atheists are right. The threat to western freedom in the 21st century is not from fascism or communism but from a religious fundamentalism combining hatred of the other, the pursuit of power and contempt for human rights. But the idea that this can be defeated by individualism and relativism is naive almost beyond belief.

It’s good to hear the rabbi agree with us that the greatest current threat to human freedom comes from untrammeled religious fundamentalism. But it’s a puzzling contradiction that he first attacks “the fundamentalists who seek to impose a single truth on a plural world” and then bemoans “individualism and relativism”.

He seems to be saying that one kind of totalitarianism can only be defeated by a different kind of totalitarianism; that human beings can’t be trusted to be decent and honorable on their own, and that to vanquish the religious fundamentalists who march in lockstep, we must learn to march in lockstep ourselves and surrender our beliefs and desires to some authority figure who will tell us how to live. It should be obvious to every historically literate person how this would go wrong. No matter how benevolent or well-intentioned that authority might initially be, that kind of power corrupts quickly, easily, and inevitably. Before long, we’d be the mirror image of what we set out to oppose.

Sacks’ scorn for individualism shows how he’s completely misunderstood the nature of the conflict. It’s true that modern liberal society is menaced by retrograde fundamentalism, and we can and must win that clash of cultures. But our victory won’t be achieved by the sword, but by the pen; not with force, but with peaceful persuasion; not through more prolific reproduction, but through free speech and the unrestricted flow of ideas. That may seem like a hopelessly optimistic dream, but it’s toppled many tyrannies before. Whether religious or secular, all dictatorships try to control speech and thought – and with good reason. When they can no longer suppress it, they almost always collapse. In our world, where information is harder to censor than ever, that’s a hopeful sign.

Sacks claims that he hasn’t found a secular ethic that can sustain civilization, but what he’s seeking is already here. Like many critics of the new atheism, he doesn’t recognize it because he’s only looking for a morality like his own: one which assumes that people can’t be trusted with too much freedom, that they need to be restrained by religion and tradition to keep them in line. Among the great body of secular moral philosophy, one value is upheld by atheist thinkers, old and new, with remarkable consistency: that of autonomy. So long as they harm no one, people should be free to do as they will, and if this causes old institutions to break down, so be it; new and better ones will arise in their place.

What’s more, the new atheists argue that this kind of freedom isn’t a Western idiosyncrasy, but the universal desire of all human beings, and that holding it out to other cultures as something they too can attain for themselves is the most effective tactic we have. The liberty of body and mind that Sacks decries is, in reality, a potent weapon against the fundamentalist belief systems that demand absolute conformity and submission of the will. Of course, the widespread adoption of reason as a method and intellectual freedom as a goal might prove to be just as damaging to the religious beliefs that Sacks advocates – so perhaps it’s no surprise that he’s so anxious to keep it bottled up.

Adam Lee is an author and activist living in New York City. He writes the blog Daylight Atheism at Patheos.