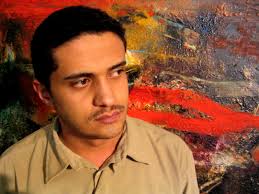 Ashraf Fayadh is a Palestinian artist, curator and poet, based in Saudi Arabia. In 2015, he was sentenced to death in connection with a collection of his poems which authorities alleged had ‘atheistic’ and ‘blasphemous’ themes.

In February 2016, after his lawyer argued that he was denied a fair trial, his sentence was commuted to eight years in prison and 800 lashes. The court proceedings against him have been flawed and unreliable from the start. For much of his two-year trial he was denied access to his lawyer.

Fayadh is reported to have repeatedly requested to transfer to Palestine, but this request was rejected once and ignored thereafter.

Fayadh publishes his second book of poetry from prison. One of the poems is titled Stroke, in honour of his father.

Fayadh’s sentence is commuted to eight years in prison, 800 lashes and public repentance. The appeal argued that Fayadh’s initial arrest in 2013 was unlawful as it was not ordered by the state prosecution service. In addition, it argued the allegation of apostasy made by Shaheen bin Ali Abu Mismar, who is alleged to have had a personal dispute with the poet, was not corroborated by other evidence, which goes against the principles of sharia law<.

Fayadh’s father dies of a stroke after hearing of his death sentence. Fayadh was not allowed to attend the funeral.

The Court of Appeal reverses the finding of the General Court. It recommends that Fayadh indeed be sentenced for apostasy, which carries the death penalty, and returns his case to the General Court. The General Court retries him and a new panel of judges finds him guilty of ‘apostasy’. The official ruling states that his death sentence is to be carried out by beheading by sword.

Throughout the trial Fayadh is denied access to his lawyer. In addition, Saudi police confiscated his identification documents after his arrest in January 2014, then denied him legal representation because he did not possess proper identification.

Fayadh is sentenced by the General Court of Abha to four years in prison and eight hundred lashes. The charge of ‘apostasy’ against him is dropped as the court finds that he has apologised and repented for it.

Fayadh is re-arrested and charged with ‘apostasy’, ‘questioning religion’ and ‘spreading atheist thought’ through his poetry. He was accused by the religious police of smoking and having long hair. Neither is a crime in Saudi Arabia; however, the religious police have the power to enforce vague Sharia guidelines including “harassing the Godly self.”

He was also accused of violating the country’s Anti-Cyber Crime Law for allegedly taking and storing photos of women on his mobile phone. The charge of ‘having illicit relationships with women’ based on photographs on his phone showing him pictured standing side-by-side with women at the Jeddah art fair.

The charge of apostasy is based on testimony from the man from the argument in 2013 and from two officers from the religious police that had arrested him.

It is speculated that Fayadh may have become a target for the religious police because he had uploaded a video of the mutaween (religious police)lashing a young man in public.

Fayadh is arrested in connection with a collection of his poems called Instructions Within. He is arrested after allegedly having an argument with a man in Abha, Saudi Arabia, who reported him to the religious police. He is released shortly after his arrest.

Fayadh was active in the British-Saudi Arabian contemporary arts organization, Edge of Arabia. At the 2013 Venice Biennale, Fayadh co-curated “Rhizoma,” a collateral exhibition of young Saudi artists sponsored by Edge of Arabia. During Jeddah Art Week, he organized “Mostly Visible” for Athr Gallery, and a decade before, Fayadh participated in “Shatta (Disembodied),” one of the kingdom’s first contemporary art exhibitions, in 2004.

Fayadh’s poems deal with life as a Palestinian refugee, as well as cultural and philosophical issues.

The Kingdom of Saudi Arabia is an Islamic state governed by an absolute monarchy in tandem with a powerful religious elite. The country’s laws are based on Sharia law.

Freedom of religion or belief is extremely oppressed in Saudi Arabia. Wahhabism – commonly described as an “ultra conservative” or “fundamentalist” branch of Sunni Islam – is functionally recognized as the state religion.

From 2014 to 2017 Saudi anti-terror law defined “the promotion of atheist thought” as an act of terrorism. In November 2017 a new anti-terror law came into effect, which appears to supersede the 2014 legislation. The “Penal Law for Terrorism and its Financing” 2017 no longer expressly mentions atheism. However the broader issues of vaguely-defined terms and criminalization of criticism of authorities remain firmly in place. The 2017 anti-terror law still continues to suppress many forms of criticism or dissent in extremely broad terms, and is actively intended to prosecute political dissent and religion or belief minorities.

The Commission for the Promotion of Virtue and Prevention of Vice (CPVPV), which enforces public morality and restrictions on public religious manifestations and practice, is known for being especially intolerant of minority religions and disbelief. It is not subject to judicial review and reports directly to the King.

We call on the Saudi Arabian government to release Ashraf Fayadh and drop all charges against him.

Humanists International has worked on Fayadh’s case since 2015.

In addition to behind-the-scenes advocacy, Humanists International has raised Fayadh’s case at the United Nations Human Rights Council a number of times. Most recently in 2020, in response to a report by the Special Rapporteur on the situation of human rights defenders; but also in 2019, during Saudi Arabia’s Universal Periodic Review, and during the General Debates in 2018, 2017, and 2016. In 2016, Humanists International ended its intervention by reading out Fayadh’s poetry, banned in Saudi Arabia, to the delegates in attendance.

In 2015, Humanists International joined around 60 human rights organizations to protest Fayadh’s death sentence, and signed an open letter to the Saudi Arabian authorities calling for his release.