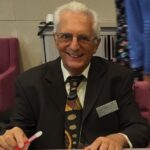 Humanist Panayote Dimitras is currently appealing a one-year sentence, suspended for three years, for allegedly filing a false accusation. The conviction relates to a complaint filed by Andrea Gilbert and Dimitras, acting in his capacity as Spokesperson for the Greek Helsinki Monitor, which alleged that a high-ranking Bishop had abused his ecclesiastical office and incited hatred in a statement they deemed to be filled with anti-Semitic rhetoric published on the website of the Diocese of Piraeus. He remains free while awaiting the outcome of his appeal.

February
On 15 February, Dimitras together with his Greek Helsinki Monitor colleague, Andrea Gilbert, were convicted of filing a false complaint against Metropolitan Bishop of Piraeus Seraphim by the Three-Judge Misdemeanors Court of Athens. They were sentenced to one year in prison, suspended for three years. Dimitras and Gilbert have filed an appeal.

April
On 29 April 2017, Dimitras and Gilbert filed a complaint filed with the Department for Combating Racist Violence (Attica Division) on behalf of the Greek Helsinki Monitor against a Bishop, alleging that he had abused his ecclesiastical office (contrary to Article 196 of the Penal Code) and incited violence or hatred (contrary to Article 1 Law 927/1979) in a statement published on the website of the Diocese of Piraeus the day previously. In their complaint, the Greek Helsinki Monitor argued that the Bishop had referenced well-known anti-Semitic conspiracy theories around “global Jewish domination.” The statement was also condemned by the Central Board of Jewish Communities in Greece as an “anti-Semitic delirium.” 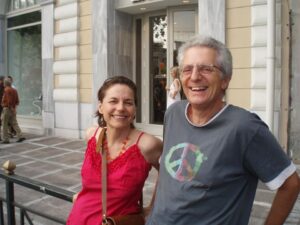 Panayote Dimitras, born in Athens in 1953, received his B.A. in Economics from the Athens School of Economics and Business in 1975, as well as a Master in Public Administration (MPA) in 1977 and a Ph.D. in 1979 in Political Economy and Government from Harvard University. An assistant professor of political science in the Athens University of Ecoclines between 1989-1992, he was forced to resign because of his human rights work. He has published in Greek “Political Background, Parties and Elections in Greece” (1991); “In Search of Lost Rights: the Dark Side of the Hellenic Republic” (2007); and “Racist Discrimination in Greece Under UN Scrutiny” (2016).

Dimitras co-founded Greek Helsinki Monitor (GHM) and Minority Rights Group – Greece (MRG-G) in 1992; he has been the Spokesperson of GHM ever since. In 2010, he also co-founded the Humanist Union of Greece (HUG); he has been a member of HUG’s Secretariat ever since. Since 2012 he has been a member of the World Organization against Torture (OMCT)’s General Assembly. Between 2014-2020 he was a member of the Executive Board of the European Humanist Federation (EHF). He is also a member of the Board of the European Implementation Network since 2018. He is a joint administrator of Racist Crimes Watch (https://racistcrimeswatch.wordpress.com), where hate crimes and hate speech are recorded and then submitted to prosecutors: they have led to the pressing of charges in some 150 cases, half of which were referred to trial. He has won scores of cases at the European Court of Human Rights, the UN Human Rights Committee and the European Committee for Social Rights on discrimination against Roma, ethnic minorities, LGBTI+ persons, and migrants; on religious oath; on violence in the form of torture, ill-treatment, injuries and deaths; on trafficking in human beings; and on excessive length of proceedings. Before domestic courts, two government officials were found guilty of defamation against him.

Dimitras is no stranger to harassment in response to his human rights work. He has faced repeated smear campaigns, threats of violence and judicial harassment in connection with his work for the Greek Helsinki Monitor. In 2008, Dimitras was threatened after challenging anti-Semtic reporting in a far-right newspaper. Dimitras was reportedly accused of being “a wretched traitor of Greece, actively and publicly supporting the existence of a Macedonian minority in this country,” as well as of being “the object of a complaint for treason against the Fatherland.”

Humanists International calls on the Greek government to quash the conviction against Dimitras and Gilbert immediately and unconditionally.

Humanists International has been monitoring the case of Dimitras and Gilbert, and has published statements in their support.