2020 has been one of the toughest years ever for the global humanist community and for humanity as a whole. The outbreak of the COVID-19 pandemic put to test our societies, our economies and our shared feeling of belonging. However, desperation and resignation did not prevail. Humanists all around the world stood true (and are still standing true) to the fundamental values of humanism, such as reason, science, democracy, and empathy. Thanks to global cooperation, investment in scientific research and individual efforts, humanity now sees a glimmer of light at the end of this tunnel.

The 2021 Humanism Conference will be a moment to look back at the last two years of fight against the virus, praising the courage of humanist activists around the world and reflecting upon the importance of the humanist worldview in times of crisis like the one we are living in today.

He has worked for a number of civil and human rights organisations throughout his career in his capacity as executive committee member, director or trustee and has represented Humanist organisations before the House of Commons, the Organisation for Security and Co-operation in Europe and the United Nations. As a prominent spokesperson for the Humanist movement in the United Kingdom he is a frequent contributor to newspaper articles, news items, television and radio programmes and regularly speaks to Humanist and secular groups throughout Britain.

Andrew has contributed to several books on secularism and humanism and is the author of the following books:

Bonya Ahmed is Bangladeshi-American author, a humanist activist and blogger who in 2015 survived a machete-wielding attack by Islamic extremists. Her husband, Avijit Roy, was killed in the attack.

Bonya is one the founders of Think Bangla, an Associate of Humanists International that produces humanist and scientific videos in Bengali. She is also moderator at Mukto-mona blog, the first online platform for Bengali speaking freethinkers. Bonya was Visiting Research Scholar at UT Austin, working on the rise of Islamic fundamentalism, and Visiting Fellow at LSE Human Rights Centre in the UK.

Dinesh Bhuju is a member and advisor of Society for Humanism Nepal (SOCH Nepal), a Member of Humanists International.

Dinesh Bhuju is an Academician of Nepal’s national science academy NAST. A doctorate from Japan, Professor Bhuju has a track record of over 30 years of experience in teaching ecology and scientific research. As a visiting professor of several universities in Nepal and abroad, he lectures Philosophy of Science. Currently, he is the Academic Head of the graduate program in International Cooperation and Development. He is a lead scientist to promote science temperament and popularize science specifically among high school children and science teachers. In the wake of the Covid-19 pandemic, he formed the e-platform “Scientist Nepal” bringing professionals together to deal with the problem. His brainchild project “Build Science Chase Coronavirus” that mobilized a huge number of young volunteer scientists has won the UNESCO Wenhui international award recently.

Emma Wadsworth-Jones is the Humanists At Risk Coordinator of Humanists International.

Gulalai Ismail is the Founder and Chair of Aware Girls, a non-governmental organization in Peshawar, Pakistan. The organization was founded in 2002 to address violence and discrimination against women and young girls in Pakistan, and advocate for women’s rights, education, and access to sexual and reproductive health resources.

Gulalai is a Pashtun human rights activist from Khyber Pakhtunkhwa, Pakistan. She is also the chairperson of the Seeds of Peace Network. She speaks on the subject of promoting peace and women’s empowerment at conferences internationally and is the recipient of the International Humanist of the Year Award from Humanists International, and of the Fondation Chirac Peace Prize for the Prevention of Conflict. She is an activist in the Pashtun Tahafuz Movement (PTM) campaigning for Pashtun human rights, and previously served as a board member of Humanists International.

In September 2019, Ismail escaped from Pakistan and reached the United States, after fearing for her life for speaking out against sexual assaults and disappearances allegedly carried out by the Pakistani military.

Dr. Prasai is the advisor and founding member of Society for Humanism Nepal (SOCH Nepal), a Member of Humanists International.

Dr. Prasai has authored several academic and research papers, books and articles dealing with a variety of topics including humanism, feminism, critical mind, political economy, global order, capitalism, socialism, ethnicity, class, caste, cooperatives, conception of self and its moral and political implication. He frequently appears on the Nepalese media (TV, radios, newspaper etc.) as a philosopher and political analyst.

Kristine Chan is the co-founder and co-president of Filipino Freethinkers (FF) from Metro Manila, Philippines. FF is a civil society organization that has been promoting reason, science, and secularism in the Philippines since 2009.

An Associate of Humanists International, Filipino Freethinkers is at the forefront of the sociopolitical battle for human rights that have been blocked because of religious bigotry, including women’s rights (SRHR, abortion, divorce, feminism), LGBT rights, and freedom of expression. Their projects include working with both secular and religious organizations, including legislators and other government officials, to protect the secularism enshrined in our constitution. FF’s advocacy of secularism and human rights has received several notable awards and has been featured frequently in mainstream media, resulting in a significant following online.

Kristine is in charge of advocacy and campaigns for Filipino Freethinkers and has led several successful grants and projects. She works with various NGOs, international and local advocacy networks, and youth organizations to provide technical assistance, conceptualize and implement campaigns, facilitate workshops, build websites, and design publications and merchandise. Together with FF, she is an advocacy representative of civil society organizations in the National Implementation Team of the RPRH Law.

She is also a versatile visual artist from the Philippines, working on both digital and traditional mediums. She finds passion in combining art, storytelling, and advocacy for progressive campaigns, such as the yearly Philippine art anthology for safe and legal abortion, “Telling Truer Stories” (pinsan.ph/anthology), an online gallery of young feminists joining the UN Commission on the Status of Women, “Young Feminist Visions” (youngfeminist.org), a gallery of photo portraits for the inroads Global Member Gathering (endabortionstigma.org), a storytelling campaign to raise awareness on the gender-based violence (GBV) women cyclists experience, “#ShareTheRoadWithHer”, a workshop on using art to help victim-survivors of GBV heal, “#DearSurvivor”, and a music album about abortion stories in the Philippines titled “Pasya.”

She also conceptualizes and facilitates various multimedia shows and events, such as the #FeministFridays workshop series, Hello, Humanists! Podcast show, and various videos and events for Filipino Freethinkers, the Philippine Safe Abortion Advocacy Network, and SheDecides Philippines. These projects feature prominent diverse voices from the Philippines and around the world such as Senator Risa Hontiveros, Nicole Curato, and Sharmila Parmanand.

Narendra Nayak is a rationalist, sceptic, and godman debunker from Mangalore, Karnataka, India. He is the President of the Federation of Indian Rationalist Associations (FIRA), an umbrella body of 83 rationalist, atheist, skeptic, secularist and scientific organisations in India. FIRA is an Associate of Humanists International.

As an apex body of rationalist organisations, FIRA is committed to the development of scientific temper and humanism in India, involved in promoting tolerance, critical thinking, women’s rights, secularization, and freedom of expression, and fighting against the Caste system of Hinduism and its violence (especially towards Dalit population), superstition, pseudoscience, and child marriage.

Rishvin Ismath is the Co-founder and present Spokesperson of the Council of Ex-Muslims of Sri Lanka, an Associate of Humanists International.

Rishvin was an Islamist actively involved with Jama’athe Islami at the beginning and then worked with Thawheed and Salafi movements in Sri Lanka before becoming an ex-Muslim in 2013. 2014 onward he writes constructive criticism about Islam and questions the faith. He is the only ex-Muslim activist to present criticism in Tamil language with real identity.

He also participates in activities for the rights of children, women, labors and war victims (disappearances). He fought justice for Darun Nusra childern’s home sexual abuse case together with his Muslim friend Fayaz A. Razack. He has faced a near death experience when ISIS attempted to kill him months before the Easter Sunday suicide attacks. He is a Rugby Union referee in Sri Lanka.

Steven Pinker is a Canadian-American cognitive psychologist, linguist, and popular science author. He is an advocate of humanism, evolutionary psychology and the computational theory of mind.

Steven Pinker is one of the world’s leading authorities on language and the mind. His popular and highly praised books include Enlightenment Now, The Better Angels of Our Nature, The Sense of Style, The Stuff of Thought, The Blank Slate, How the Mind Works, and The Language Instinct.

Recipient of several major awards for his teaching, books, and scientific research, Pinker is Harvard College Professor and Johnstone Family Professor of Psychology at Harvard University. He also writes frequently for The New York Times, the Guardian and other publications. He has been named Humanist of the Year by the American Humanist Association in 2006, one of Prospect Magazine’s ‘World’s Top 100 Public Intellectuals’, counted among Foreign Policy’s ‘100 Global Thinkers’, and one of Time Magazine’s ‘100 Most Influential People in the World Today’. 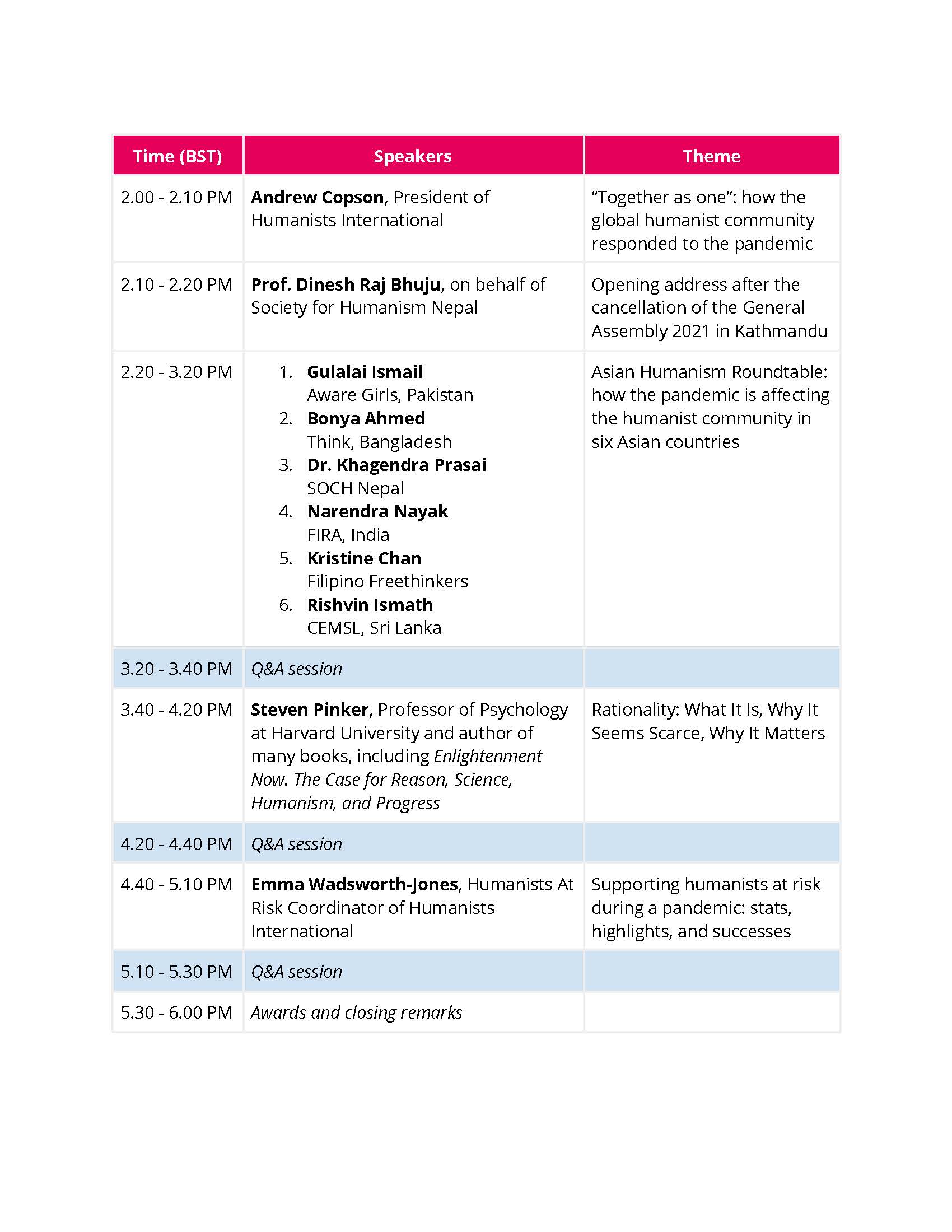 Register now to the 2021 Humanism Conference