This Sunday, May 17th, marks the International Day Against Homophobia, Transphobia and Biphobia.

The day serves as a reminder of the violence and discrimination that LGBTI people continue to experience around the world. It is also a celebration of the remarkable progress that has been made since the days when the global consensus held that being LGBTI meant that you were suffering from a mental illness.

To commemorate the event, in this post we highlight some key developments affecting LGBTI people around the globe in the past year and present a snapshot of some of our achievements in the field of LGBTI rights.

Global Snapshot of Developments in 2019

State-sponsored homophobia and transphobia continues to persist today in many forms. 70 countries still have laws criminalising same-sex relationships, 6 of which impose the death penalty as a punishment. In April 2019, Brunei shocked the world when it enacted an Islamic law making it legal to stone LGBTI people to death, though international condemnation later caused it to backtrack on the death penalty element of the punishment. Kenya upheld a law criminalising same-sex relationships. A similar law was passed in Gabon, and one is currently being considered in Uganda and Indonesia. In Hungary, under cover of the Coronavirus pandemic, the government is preparing to end legal recognition for transgender individuals.

LGBTI ‘conversion therapy’ – a form of abuse inflicted upon LGBTI people in an attempt to ‘cure’ them – continues to persist in China, Colombia, the United States and elsewhere. Homophobic and transphobic hate crimes in the UK have doubled since 2014. A survey released by the EU showed that 6 in 10 LGBTI couples are afraid to hold hands in public for fear of assault or harassment, while 1 in 5 trans and intersex people report having been attacked on the basis of their gender identity. While transgender visibility in popular culture has no doubt improved in recent years, structural oppression and negative social attitudes (often grounded in characterisations of trans people as sexual predators or social deviants) are still very much entrenched. A report released on Trans Day of Remembrance recorded 331 trans murders in 2019. 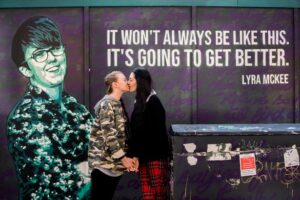 There were some bright spots for LGBTI equality in 2019, including Taiwan becoming the first country in Asia to legalise same-sex marriage and Northern Ireland being the last in the UK to do the same. Both Botswana and Angola decriminalised LGBTI relationships and homophobic laws are currently being challenged in Jamaica, Singapore and Barbados.

The Impact of Covid-19

Overall however, the situation of LGBTI people is likely to worsen following COVID-19 and the resulting economic recession. Stay-at-home policies may make homelessness and domestic violence more likely for LGBTI individuals who face rejection from their families. Access to required healthcare, including HIV treatment, hormonal treatment and IVF treatment, is likely to be deprioritised in light of the current pressures on health systems. In the past, LGBTI people have been scapegoated for man-made and natural disasters, and there are scattered reports of this already happening in some countries, from South Korea to Uganda. Where countries have imposed policies requiring men and women to leave the house on different days, trans and non-binary individuals also face greater risks of discrimination and harassment.

In light of this, as humanists it is more important than ever that we extend our solidarity and our support to all members of the LGBTI community and continue to push for progress in the field of LGBTI rights.

Spotlight on our 2019 Initiatives

In 2019, the global humanist community passed the Reykjavik Declaration on the Family and Human Rights. This declaration, grounded in equal rights and respect for LGBTI people and people of all gender identities, emphasised the importance of adopting an inclusive definition of the family in which all forms of love can be openly expressed and recognised. 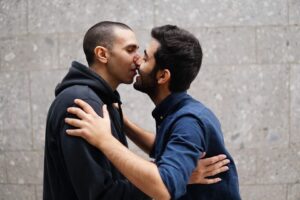 Two of our advocacy highlights from 2019 included: in May, Humanists International called out Nigeria and other African states for denying free expression and other rights to LGBTI African citizens before the African Commission on Human and Peoples’ Rights; and in September, at the 42nd session of the UN Human Rights Council, Humanists International condemned Brunei’s shameful record on human rights, sexual orientation and gender identity. In Europe, we continue to collaborate with LGBTI organisations at the UN and the Council of Europe level on issues affecting LGBTI individuals.

We also remain inspired and moved by Mohamed Hisham’s story. After being persecuted for his atheism in Egypt,  Mohamed managed to escape last year with help from the humanist community and found refuge in Germany. Being in Germany has allowed him to officially come out as queer, and he has been using his platform to show support for the LGBT community in Egypt and the wider Middle East. We are extremely proud of him and wish him all the best.