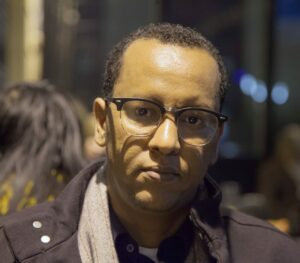 Mohammed Ould Shaikh Ould Mkhaitir (“Cheick Mkhaitir”) is a blogger and anti-slavery activist from Mauritania. In 2014, he was sentenced to death for hypocrisy and for insulting the Prophet under Article 306 of the Mauritanian Penal Code, based on a post he had written which critiqued the use of certain religious texts to justify slavery and slave-like practices in Mauritania.

Even though his sentence was commuted to a maximum of 2 years, Mkhaitir was ultimately detained for over 5 years. He spent much of his detention in solitary confinement, with little access to light and ventilation. He was released in 2019.

Mkhaitir delivers a statement during the 3rd cycle of Mauritania’s Universal Periodic Review. He critiques the decision to revise the Penal Code in 2018 in order to make the death sentence for crimes of apostasy and blasphemy compulsory, and the ongoing harassment and persecution of anti-slavery activists in Mauritania.

Mkhaitir speaks on behalf of Humanists International at the 67th session of the African Commission on Human and Peoples’ Rights. His statement addressed the persecution of human rights activists in Mauritania and other African States.

Mkhaitir manages to relocate to a country in Europe.

Mkhaitir is released after 5 and a half years held in detention, mostly in solitary confinement. Mkhaitir has said of his time in detention that “prison conditions were very harsh, to the point that I sometimes went seven months without a shower, and the psychological pressure was terrible. I was not entitled to family visits until a year after my arrest and after the death sentence was passed after the trial I underwent at the end of 2014.”

One of the conditions set for his release is that he make public statements of repentance via Facebook and other media, including on Mauritanian national television.

The Mauritanian National Assembly passes a law replacing article 306 of the Criminal Code and making the death penalty mandatory for anyone convicted of “blasphemous speech” and acts deemed “sacrilegious”. The new law eliminates the possibility under article 306 of substituting prison terms for the death penalty for certain apostasy-related crimes if the offender promptly repents. The law also extends the scope of application of the death penalty to “renegade acts.”

The timing of the law appears to be related to Mkhaitir’s case.

The Court of Appeals of Nouadhibou quashes Mkhaitir’s death sentence and revises it to a two-year sentence and a fine.

Mkhaïtir had already served almost three years in detention by the time that the Court of Appeals reduced his sentence, and should have been released at this point. However, the government continues to hold Mkhaitir in an undisclosed location in “administrative detention” until July 2019, ostensibly for his own safety.

The UN Working Group on Arbitrary Detention issues an opinion finding Mkhaitir’s detention to be arbitrary and calls for Mauritania to immediately release him.

The Supreme Court sends the case back to the Court of Appeals, the same court which upheld Mkhaitir’s death sentence.

The Supreme Court is scheduled to deliver a final ruling in Mkhaitir’s case today, but the verdict is postponed after protesters surrounded the court to demand his execution.

Mkhaitir admitted before the court that he had made a mistake and asked for forgiveness. According to Article 306 of the Mauritanian Penal Code, “[e]very Muslim guilty of the crime of apostasy, either by word or by action of apparent or obvious, will be invited to repent within three days. If the accused does not repent within this time, he is to be sentenced to death, and all of his property shall be confiscated by the government.”

After nearly a year in detention, in a one-day trial, Mkhaitir is sentenced to death by firing squad by a court in Nouadhibou, north-west Mauritania.

There were numerous irregularities in the trial including failure to take evidence into account, the police loss of “repentance” tapes, and the refusal of the court to allow the content of M’kheitir’s writing to be discussed. Death threats were so prevalent during the time leading up to the trial that three of Mkhaitir’s lawyers resigned.

At the outset of the proceedings, Mkhaitir again repented before the tribunal and asked for forgiveness, explaining that he never meant to insult the Prophet and that any insult to be found in his article was the result of misinterpretation.

The court declared Mkhaitir guilty of the crimes of (1) hypocrisy (reportely someone who, having committed the crime of apostasy, repents insincerely) and (2) insulting the Prophet, and sentenced him to death by firing squad. When the verdict was read aloud, Mkhaitir fainted as the crowd cheered.

Mkhaitir is arrested and charged with apostasy under Article 306 of the Penal Code. The charge relates to a blog post that spoke of the situation of slavery and caste discrimination in Mauritania. The post was published in December 2013. Following its publication, mass protests calling for Mkhaitir’s execution for ‘blasphemy’ took place across the country.

Humanists International’s 2014 Freedom of Thought Report noted on the protests that: “there were numerous calls, including by imams, scholars and professors, for M’Kheitir’s execution. One preacher, Abi Ould Ali, offered 4,000 Euros to anyone who killed the blogger. The Mauritanian government and opposition parties supported the protests. President Mohamed Ould Abdel Aziz said, “We will apply God’s law on whoever insults the prophet, and whoever publishes such an insult.””

In 2021, Humanists International republished an interview with Mkhaitir in which he speaks about his background and the trials he faced as an outspoken member of the Maalmine caste.

Of his younger years, and his decision to get involved in anti-slavery activism, Mkhaitir recounts: “I was born in 1983, I have three brothers (two girls and a boy) and I am the oldest of my brothers. I received pure religious education in my childhood until I memorized the Quran and many Islamic Sharia books, then I entered the regular school and continued my studies until I got a master’s degree in economics. My thoughts started to change when I entered university, where I then moved to the capital to study, and I started to read a lot of books, I was not satisfied since my childhood with the situation social imposed, but I had no choice, I was expelling the ideas that came to me from time to time, except The university scene was a crucial step, because I joined a student movement of the communist left). . . . After my first year in college, my ideas became clear enough to defend my issue – the untouchables issue – and other causes like slavery. And I took the writing as a weapon to fight the battle. I continued to work in this framework until one of the articles at the end of 2013 led me to stand in front of the gallows.”

The law and legal procedures of Mauritania are based on Sharia. Sharia crimes such as heresy, apostasy, atheism, refusal to pray, adultery and alcoholism are all contained in the Penal Code.

As a result of a change in law in 2018, apostasy is a crime now punishable by death. The amendment to Article 306 of the Penal Code states that the death penalty will be applied to “every Muslim, man or woman, who ridicules or insults Allah”, his messenger, his teachings, or any of his prophets, “even if [the accused] repents”. The law also provides for a sentence of up to two years in prison and a fine of up to 600,000 Ouguiyas (approximately EUR 13,804) for “offending public indecency and Islamic values”, or “breaching Allah’s prohibitions” or assisting in their breach.

Mauritanian society is rigidly caste-based. The Beidane, who are of Arab-Berber origin, are politically and socially dominant, while the Haratine and Maalmine ethnic groups remain economically and politically marginalized. As Mkhaitir himself has written:

“There are three basic castes in Mauritania. The first is the ‘Beïdane’, which means the class of masters, the second is the ‘Harratine’, who are the slaves, and the third is the ‘Maalmine’ class, which is the untouchable class . . . . Land in Mauritania belongs to the master class, and some former slaves own a small part of it. As for the class of ‘Maalmine/untouchables’, they have nothing.”

Humanists International has worked on Mkhaitir’s case since around the time of his sentencing in 2014.

Throughout his period of detention, Humanists International monitored and publicly campaigned for Mkhaitir’s release, as well as applying pressure through back channels to campaign for his release. It condemned his initial death sentence and challenged his “apostasy” conviction multiple times before the UN Human Rights Council. In 2015, it also made a written submission to the Universal Periodic Review (UPR) of Mauritania, in which his case was the main focus. In November 2018, Humanists International joined a coalition of 31 NGOs calling for the court order for his release to be respected.

Humanists International continues to work with Mkhaitir to raise awareness of continuing rights violations in Mauritania. During Mauritania’s 2021 UPR, Mkhaitir delivered a video statement at the UN Human Rights Council on behalf of Humanists International, in which he condemned the failure of the government to address the ongoing practice of slavery and its persecution of anti-slavery activists.